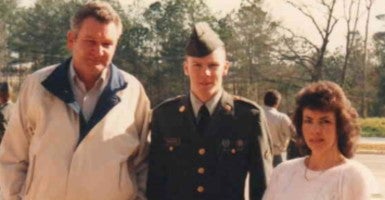 Warren Davidson, the representative who would replace John Boehner, stands with his parents after graduating from Army basic training. (Photo via Davidson Office).

Standing in former Speaker John Boehner’s empty and cavernous Longworth office, Ohio’s newest congressman seems out of place. Maybe that’s because Warren Davidson is more of a business and military man than a politician.

Before being sworn in last week, Davidson made a career parachuting from airplanes as an Army Ranger, then filing patents as a manufacturing entrepreneur. Other than a short stint as a township trustee, he’s never held elected office until now.

But what Davidson lacks in political acumen, he’s confident he can replace with leadership experience. His operating doctrine is simple, he tells The Daily Signal: “Fight the war you’re in, not the one you wish you were in. Pay attention to the situation and read it.”

So far, it’s worked out for the rookie legislator.

Though it’s just one seat out of 435 in the House, Davidson’s subsequent June 7 victory represents an expansion of the conservative congressional beachhead.

“It’s huge,” Ken Cuccinelli, former Virginia attorney general and president of the Senate Conservative Fund, says of Davidson’s win.“It was historic for [Rep.] Mark Meadows, R-N.C., to courageously knock John Boehner out,” Cuccinelli tells The Daily Signal, “but it is a true sea change to replace him with a true conservative.”

The Freedom Caucus first came to prominence when it unseated Boehner. Meadows spearheaded that offensive when he presented a motion to vacate the chair, a parliamentary procedure that hadn’t been used in over a century.

To take the seat that Boehner left, Davidson first won the Republican primary in March by beating out 14 more established candidates, including a state senator, a state representative, and a wealthy businessman.

He focused his early efforts on the ground game, rallying grassroots organizers to knock on doors, pass out fliers, and get out the vote. And for expert advice, Davidson looked outside Washington’s traditional consulting sphere, signing Jamestown Associates—the conservative firm blacklisted by party brass and the National Republican Congressional Committee.

“Warren worked hard, really hard,” Barney Keller, executive vice president of Jamestown Associates, tells The Daily Signal. “He had a very energized volunteer base, and he had a compelling message—that he was going to change Washington.”

The local race quickly became a national contest with dueling political organizations flying into the 8th District’s airspace and blitzing the market with millions of dollars worth of television, radio, and digital ads.

Ultimately, a combination of grassroots energy, outside spending, and timing handed Davidson the win. In less than six months, the political amateur would go from last to first, winning both the March primary by eight points and the June special election by 77 points.

“The big schism was between the establishment politicians versus outsiders,” explains Mack Mariani, chairman of the Political Science Department of Xavier University. “And this is an outsider year. Had Boehner left four, six, or eight years ago, we probably would be looking at a sitting state legislator who would’ve stepped into the seat.”

That energy was on full display Wednesday night. More than a hundred supporters made the eight-hour drive from the eastern side of Ohio to Washington, crowding into Davidson’s new office to cheer him on before he took the official oath of office the next day.

Groups that cheered when Boehner stepped down from office in October were ecstatic that a conservative captured his seat this year.

But Davidson didn’t take any shots at the outgoing speaker during the campaign and he wouldn’t take any the day after he took office. In fact, the man who held the seat for almost 25 years doesn’t seem to weigh on Davidson’s mind much at all.

A Boehner aide tells The Daily Signal that the pair traded phone calls but not much else.

Turns out, the pair doesn’t have much to talk about. “I’m a nonsmoker,” Davidson quips when asked how he compares with his predecessor. “I was on a golf team once but I don’t golf much… And yeah, I’m definitely less tan.”

Between sips of coffee in his empty office, Davidson confirms that he last spoke to his predecessor when Boehner congratulated him after his primary win. But after just a day in his position, Davidson already seems to bristle at repeated questions about Boehner.

During the campaign, Boehner was helpful “in the sense that he wasn’t working hard to get someone else elected,” Davidson tells The Daily Signal. “I’ll say, too, he was very gracious despite the national narrative—people seem incredibly interested in what lunch table I’ll sit at. It’s a little bit like junior high, frankly.” Still, Davidson’s first week in the nation’s capital already has been marked with palace intrigue.

Davidson made headlines when he accepted an invitation to join the House Freedom Caucus, the group of hard-liners who drove Boehner from Congress. But the freshman’s decision wasn’t surprising. Chairman Jim Jordan, R-Ohio, endorsed Davidson in January, and the fundraising arm of the caucus spent nearly $43,000 to get him elected.

In less than two years, Freedom Caucus members have toppled Speaker Boehner and his longtime second, Majority Leader Eric Cantor, R-Va. With Davidson’s addition, their ranks swell to around 40 members.

Rep. Dave Brat, R-Va., sees the Davidson victory as evidence “the Republican brand has to move in our direction.” Brat, who canned Cantor in the 2014 primary, said the caucus expects another “four or five new recruits” after the November election.

Connection to the Freedom Caucus so far hasn’t affected Davidson’s relationship with Boehner’s successor, Speaker Paul Ryan, R-Wis. Ryan praised the newest Ohio representative as “a strong conservative leader” shortly after his victory, adding that he “looks forward to working with you to get our country back on track.”

Direct and to the point, though, Davidson doesn’t make much of the political drama that punctuates Capitol Hill. “I started out life as a grunt, I was an infantry guy,” he explains, “and I just figure things out along the way.”

From Bootcamp to Capitol Hill

After graduating from high school in 1990, Davidson went straight into the Army. And after basic training, he went to Germany as a member of a mechanized infantry unit. There, he witnessed the fall of the Berlin Wall, excelled in his unit, and earned a commission to West Point—a rare opportunity for enlisted soldiers.

As an officer, Davidson would serve in some of the Army’s most elite and prestigious units, including the Old Guard, the 75th Ranger Regiment, and the 101st Airborne Division.

During that time, Davidson didn’t pay close attention to politics, except when congressional inaction directly interfered with his military mission. When preparing an airborne unit to deploy to Kosovo, Davidson says, a fight over the budget left his soldiers unprepared.

“We wanted to train the machine gunners on live fire to get them ready to deploy,” Davidson remembers. But because of a lack of funding, “we had 18 rounds of ammo per machine gun, which is nothing.”

Instead, the officers “just trained fewer people,” he says, shaking his head, “we weren’t as combat ready as we should’ve been.”

Growing frustration with Washington’s lack of leadership eventually prompted Davidson to end his career in the Army after almost a decade of service.“That’s the real reason I got out,” he says. “I felt like we didn’t know who we wanted to be after we won the Cold War.”

Davidson returned to Ohio to help run his father’s business, a small manufacturing company in Troy. He modernized the firm, grew the workforce from 20 to about 200, and didn’t think much about national politics.

“You don’t have to be a former Army Ranger to hear the words ‘what difference does it make’ and have your blood boil,” Davidson says, referring to Clinton’s January 2013 remark before the Senate Foreign Relations Committee.

When Boehner’s seat came open, he decided to run after reaching out to “the person who pinned Clinton to the wall best” during the House side of the investigation: Jordan, a member of the Oversight and Government Reform Committee, which questioned Clinton.

As a soldier, Davidson has endured some of the most intense training the U.S. military provides. But in Washington, the new statesman didn’t receive any orientation, just half-a-dozen thick binders on parliamentary procedure.

“It’s like drinking from a firehouse,” Davidson tells The Daily Signal. But even though he’s a political novice, the Army veteran says he’s undaunted. He tells supporters that the new job feels “like going back to active duty.”

Davidson says he plans on linking his military experience to his new political duties. While the tactics differ, the mission remains the same. “It’s a different sort of animal but it’s essentially the same oath,” he explains, before reciting the civilian version of the military oath of office:

To solemnly swear to support and defend the Constitution of the United States against all enemies, foreign and domestic … well and faithfully discharge the duties of the office on which I am about to enter. So help me God.

Davidson will have a short deployment in Washington to make good on that oath. He’s up for reelection this November.

In the long run, Davidson is gunning for a spot on the Armed Services Committee. But he’s not waiting around for one to open up. He says he already has his first piece of legislation ready to go, a bill requiring Congress to use the same health care given to veterans.

It’s not a punishment for Congress, he explains, but “an alignment of interests” between politicians and members of the military.

“It says to every veteran, ‘We’re willing to be in it with you. We’ll have the same quality of care. We’re not going to ask you to do something we wouldn’t do.’ That’s an important thing for leadership. While Davidson settles down to his new legislative post, conservatives have started recounting their political laurels.

For David McIntosh, president of the Club for Growth, Davidson’s victory serves as a shot across leadership’s bow.“It should mainly serve as a warning to the broad Republican conference and the current leadership,” McIntosh, himself a former Indiana congressman, tells The Daily Signal.

“If you return to the days of Boehner and Cantor,” he says, then GOP brass is entering “politically dangerous waters.”

For now, that’s not on Davidson’s radar.

Instead, the Ohio freshman remains focused on recruiting staff to fill his empty office and learning the legislative process. “I’m still getting my feet wet,” he explains, adding that he’s anxious “to just do the work.”