For Americans Who Had Cash Seized By Government, a Chance to Get It Back 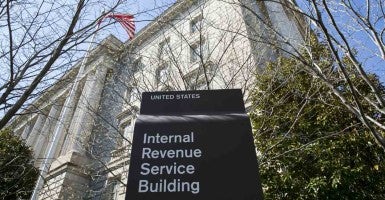 The IRS will send letters to people involved in 700 cases who had money seized by the tax agency based on allegations of structuring. (Photo: Kris Tripplaar/Sipa USA/Newscom)

In a victory for lawmakers working to make it harder for the government to take property from innocent Americans, the Internal Revenue Service plans to give people who have had money seized over the last six years the chance to petition to get their money back, The Daily Signal has learned.

According to a GOP source, the IRS told the House Ways and Means Oversight Subcommittee that it will send letters to everyone the agency seized money from for alleged structuring violations, which involves making consistent cash transactions of just under $10,000 to avoid reporting requirements, starting in October 2009.

The GOP source said that amounts to roughly 700 cases, and those involved will have the opportunity to file petitions for remission or mitigation—akin to a petition for a presidential pardon—with the tax agency.

Once petitions are filed, the IRS will review them and determine if the petitioner qualifies to get all or some of his or her money back.

Those who had money or property seized by the IRS before October 2009 can contact the tax agency to see if they are eligible to get their money back.

The GOP source did not know how much money was seized in those 700 cases. However, from 2007 to 2013, the IRS seized $43 million in more than 600 cases where the only crime committed was structuring, according to the Institute for Justice, a public interest law firm in Arlington, Virginia.

However, during a hearing last month, the IRS said it had identified only 75 cases involving property owners whose money was wrongfully seized.

The IRS did not return The Daily Signal’s request for comment.

The Institute for Justice was the first to use petitions for remission or mitigation for closed civil forfeiture cases. Last year, the law firm filed petitions with the Department of Justice and IRS on behalf of clients Ken Quran of North Carolina and Randy Sowers of Maryland, both of whom previously settled with the government.

The IRS and Justice Department returned the rest of Quran’s money, but has yet to give Sowers’ his money back.

Structuring is the practice of consistently depositing or withdrawing just under $10,000 to avoid federal reporting requirements. Under the Bank Secrecy Act, intentionally structuring cash transactions is a crime.

The news from the IRS is a significant development in the Oversight Subcommittee’s investigation into the tax agency’s use of civil forfeiture.

Over the last two years, the panel, led by Chairman Peter Roskam, R-Ill., has highlighted stories of innocent business owners who had thousands seized by the IRS solely for their pattern of cash deposits or withdrawals.

Additionally, in a rare display of bipartisanship, Roskam and lawmakers on the Oversight Subcommittee sent letters to the government earlier this year urging them to return money “inappropriately” seized by the IRS under civil forfeiture.

Civil forfeiture is a legal tool that gives law enforcement the power to seize cash, cars, or property if they suspect it’s connected to a crime.

Additionally, a subset of civil forfeiture laws regulating cash transactions allows the government to seize money from those accused of structuring violations.

Both civil forfeiture and structuring laws were intended to target drug traffickers, money launderers, and those financing terrorist activities. However, small business owners have emerged in recent years telling of how they’ve had money seized by the IRS after the agency alleged they were structuring cash withdrawals and deposits to intentionally skirt reporting requirements.

During a hearing last month, the Ways and Means Oversight Subcommittee heard testimony from two Maryland farmers, Calvin Taylor and Sowers, who had $90,175 and $63,000 seized by the IRS, respectively.

Both Taylor and Sowers each settled with the government, which resulted in the forfeiture of $41,790 for Taylor and $29,500 for Sowers.

The two men filed petitions for remission or mitigation with the tax agency, but have not yet had their money returned.

To further prevent innocent Americans from having money seized, Roskam and Rep. Joe Crowley, D-N.Y., who also serves on the Oversight Subcommittee, introduced a bill last month that prohibits the IRS from seizing money from people who commit structuring violations unless the agency proves the money was tied to a crime.

The legislation, called the Clyde-Hirsch-Sowers Respect Act, is named after Andrew Clyde; brothers Jeffrey, Richard, and Mitch Hirsch; and Sowers—all small business owners who the IRS seized money from.