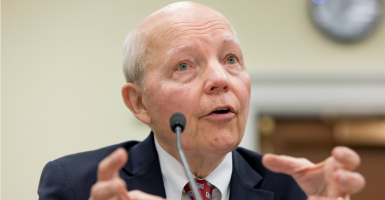 “We are going to stay on this case until he finds something else to do or he’s in a cell he can spend a lot of time in,” Rep. Jody Hice, R-Ga., said Friday at the Road to Majority Conference, a gathering of conservative and faith-based activists in the District of Columbia.

Hice is a member of the House Oversight and Government Reform Committee, which referred the impeachment articles to the Judiciary panel.

“You remember the Lois Lerner scandal and the targeting of conservatives and conservative Christian organizations? Absolutely inexcusable,” Hice said. “We’ve had hearings with Koskinen. We’ve asked him to step down from his position. He’s refused to do so. We’ve sent a letter to the president asking him to remove Koskinen. He refused to do anything about it. So, we went the next step. That is, we filed articles of impeachment against John Koskinen.”

Lerner was the IRS official in charge of tax-exempt organizations. She was found in contempt of Congress after saying she did nothing wrong, and then refused to answer questions by invoking her Fifth Amendment right against self-incrimination. Lerner later retired.

Koskinen came to the IRS after the scandal had surfaced, but congressional investigators say he has misled Congress and obstructed the investigation by failing to produce documents. Koskinen did not show up at his Judiciary Committee’s impeachment hearing last month.

The IRS said in a statement at the time that Koskinen did not have time prepare for the hearing. In a written statement to the Judiciary Committee, Koskinen said there is “understandable frustration with the document production and retention challenges of our agency during the past several years.” He stressed he was not there when the alleged targeting occurred and that “Under my direction, the IRS has responded comprehensively and in good faith to the various subpoenas and document requests from the investigating entities.”

Earlier this week, as part of a lawsuit, the IRS released a list totaling 426 mostly conservative organizations that were targeted, significantly more than the 298 that the Treasury Inspector General for Tax Administration had identified when it revealed the scandal in 2013.

“It is important to note that these numbers are consistent with those discussed in detail in the May 2013 report by the Treasury Inspector General for Tax Administration,” a statement from the IRS said. “In addition, there are some differences between the court case and the inspector general’s report, but the bottom line is the raw numbers are roughly comparable.”

The IRS has previously said there was no intentional targeting.

“There were hundreds of conservative groups on the list,” McConnell said Friday at the Road to Majority Conference. “The Obama administration’s conservative speech suppression scandal shocked a lot of Americans when it first came to light. It was brazen. It’s why we passed reforms that will prevent another Lois Lerner.”