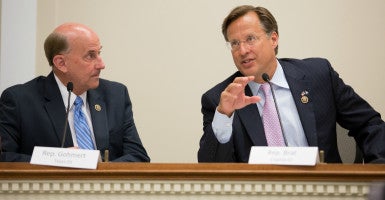 Reps. Louie Gohmert of Texas and Dave Brat of Virginia were among the conservatives who voted against a bill to address Puerto Rico's debt crisis. (Photo: Willis Bretz for The Daily Signal)

A bill establishing a legal framework for Puerto Rico to restructure its $72 billion debt load passed the House by a 297-127 vote after months of haggling among the Obama administration, Democrats, bondholders, unions, Puerto Rico officials—and conservatives.

About the only thing conservatives agree on about legislation the House passed Thursday night providing rescue to Puerto Rico’s debt crisis is that it’s not a bailout.

“There are good reasons to be for the bill, and there are good reasons to be against the bill, but this is not a bailout,” said Rep. Mick Mulvaney, R-S.C., referencing the fact that Congress’ solution does not include federal taxpayer money for Puerto Rico. “I certainly don’t want to see people saying I voted against it because it’s a bailout. That is a cheap, and intellectually dishonest way to deal with this. I hope we take it to a higher level intellectually and be honest on both sides of the aisle.”

Hosting a briefing for reporters Thursday afternoon on Capitol Hill, conservative House members laid bare their differences over the bill.

Mulvaney, a leader of the conservative House Freedom Caucus, opposed the bill.

Ever since House Speaker Paul Ryan, R-Wis., promised to act on a solution for Puerto Rico and its 3.5 million American citizens, the debate over what Congress should do was an uncomfortable one for conservatives who have little sympathy for financial mismanagement.

While financially struggling American cities have access to debt relief under Chapter 9 of the U.S. bankruptcy code, Puerto Rico is exempt from this right as a territory.

When the original version of the bill, introduced in April, was rejected by Republicans who stopped it from even getting a vote, some conservatives realized they could use their positions to shape the legislation in a positive way.

Most prominent among those actors was Rep. Raúl Labrador, R-Idaho, a leader of the Freedom Caucus, who is Puerto Rican.

Labrador voted in favor of the bill, which he helped negotiate.

The 40 or so members of the Freedom Caucus were unusually quiet during negotiations of the bill, deferring to Labrador and the closeness he has with the issue, tied to the island by his heritage and his presence on the congressional panel with jurisdiction over Puerto Rico, the Natural Resources Committee.

Though fellow conservatives credited Labrador with adding provisions favorable to them to the bill, by including language that payments to pensioners would not be prioritized over secured debt—among other things—many of his colleagues did not ultimately follow his lead.

“There’s been good arguments from my colleagues, but with one most important caveat,” said Rep. Dave Brat, R-Va., a Freedom Caucus member who voted against the bill. “The people of Puerto Rico have to be in favor of this. If they are in favor of it, I am in favor of it. A former governor is against it, the current governor is against it, the people are against it. The United States Congress does not ever have the right to overrule the legislative body of another territory.”

Labrador, who spoke at the briefing on Capitol Hill with Brat, quickly interrupted the Virginia freshman, noting a ruling from the Supreme Court Thursday that said Puerto Rico is not sovereign, even though it has its own government and constitution.

“The Supreme Court today affirmed the responsibility we do have [for Puerto Rico],” Labrador said. “What I fear, actually, is that because of the responsibility we have, that not only is the bill not a bailout out, but I believe this bill is preventing a bigger cry for a bailout to these states like Illinois and California that are mismanaging their finances.”

The Puerto Rico debt relief legislation provides new federal oversight over the island by creating a control board with powers to manage the territory’s financial affairs, and enforce balanced budgets. The board’s seven members are to be appointed by President Barack Obama, from a list of names provided by congressional leaders.

There would be a stay on litigation as the control board gets an opportunity to oversee negotiations between creditors and the Puerto Rican government over settling terms of the debt.

In an example of the split between conservatives, though many support the concept of a restructuring board, and believe it can help Puerto Rico enact economic reforms, some wish the legislation contained more “pro-growth” provisions.

The Republican Study Committee, the largest conservative group in the House, expressed disappointment that House leaders prevented a vote on an amendment to the bill that would have exempted Puerto Rico from the Jones Act.

The Jones Act, meant to protect American shipping interests, requires vessels transporting goods within the country to be U.S.-built and owned, and at least 75 percent U.S.-crewed.

“While I would like to help the restructuring, I think in a broad context it’s a bad message for other entities,” said Rep. Marlin Stutzman, R-Ind., a Freedom Caucus member who supported the bill despite some reservations. “What it does do in the broader context is this is the beginning of the end. Puerto Rico is a unique situation, but I think in the broader context, the American people will see it for what it appears to be.”

At least one conservative is able to put any tension over the bill aside.

“The great thing about conservatives is we can disagree, but I know Raúl [Labrador] is smart and Raúl is a good guy,” said Rep. Louie Gohmert, R-Texas, who opposed the legislation. “It’s possible the board could address these issues, especially with the way Raúl has helped reform the board, and I’m grateful he has.”

This piece has been updated.