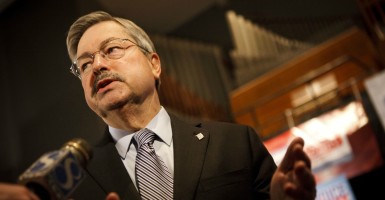 “I think most Iowans respect people’s freedom of religion and right to be able to pray. This is something that’s voluntary,” Gov. Terry Branstad said on Iowa’s WHO Radio of the Bible push. (Photo: Patrick Fallon/ZUMAPRESS/Newscom)

Iowa Gov. Terry Branstad is encouraging citizens of his state to spend more time reading the Bible, by calling for a Bible-reading marathon. However, a couple of organizations are threatening to sue over what they believe is a violation of the separation between church and state.

Branstad, a Republican, signed a proclamation encouraging Iowans to read the Bible on a daily basis “each year until the Lord comes” and to participate in a 99 county Bible reading marathon from June 30 to July 3.

The Bible reading marathon is set to take place with Bible scripture read out loud in front of the courthouses in all of Iowa’s 99 counties. Several Christian-based groups, including the Iowa Prayer Caucus, are organizing the events. Some of the events will include prayers every 15 minutes, The Des Moines Register reported.

The American Civil Liberties Union and the Freedom From Religion Foundation have criticized the proclamation and are considering suing, The Des Moines Register reported.

“The Governor’s proclamation is frankly outrageous and embarrassing, and inconsistent with our core American and Iowan principles of inclusion and respect of all its people of all faiths, as well as those who are not religious,” ACLU of Iowa Legal Director Rita Bettis said in a statement to The Daily Signal.

Freedom From Religion Foundation Co-President Annie Laurie Gaylor told The Daily Signal that her organization, an atheist and agnostic nonprofit based in Madison, Wisconsin, is asking Branstad to rescind the proclamation.

“It’s totally beyond the purview of a governor or any public official to request that people read the Bible, much less that they engage in a Bible marathon or that they read any ‘holy book,’” Gaylor told The Daily Signal. She added: “Government is supposed to be neutral towards religion. It’s not supposed to play favorites.”

Gaylor says the proclamation is “unconstitutional” and “egregious” and that her organization is “hoping to sue.”

“We have a godless, secular Constitution,” Gaylor said. “There’s no Bible in it.”

The Freedom From Religion Foundation sent a letter to Branstad on Wednesday saying that the proclamation sends a message that “Iowa prefers and endorses the Christian faith over other religions and over nonreligion,” of which the organization says violates the separation of church and state.

Branstad says he was “shocked” to have groups threaten to sue him over the Bible reading proclamation.

@TerryBranstad: Important to ‘Ask for Divine Guidance,’ Calls on Iowans to Read the Bible Daily

“Virtually every president since Abraham Lincoln has signed proclamations encouraging prayers and Bible reading right on through including President Obama,” Branstad told WHO Radio. He added: “Other governors, of both parties, have done this.”

Branstad told WHO Radio that First Liberty Institute, a legal organization that exclusively defends Americans’ religious freedom, “has offered to defend us” if sued. Branstad said:

I feel very confident based on the information they [First Liberty Institute] provided me that we will be successful if they’re stupid enough to file the lawsuit. It may be just a threat or an effort for them to raise money from left-wing groups, but I just think this is absurd to threaten a public official for doing something good to encourage people to read the Bible or to pray.

“The governor has every right to issue this proclamation,” Hiram Sasser, deputy chief counsel for First Liberty Institute, said in an emailed statement to The Daily Signal. “These types of proclamations have been issued by governors and presidents since the days of George Washington and Abraham Lincoln. Whenever courts are asked to address these proclamations, the courts have routinely thrown the cases out because, since no one is injured by them, no one has standing to sue over them. So Gov. Branstad’s proclamation is beyond judicial question.”

“In fact, Gov. Branstad’s proclamation echoes Benjamin Franklin’s suggestion at the very Constitutional Convention itself that an appeal to God needed to be made for His intervention and that each day of the Convention must begin in prayer,” Baker wrote. “Or when President Abraham Lincoln in his Second Inaugural address boldly proclaimed that God was judging America for its sins and in order for the Civil War to end, America need to repent.”

Branstad told WHO Radio that Iowa Prayer Caucus State Director Ginny Caligiuri had approached him about doing this particular proclamation.

Caligiuri defended the marathon in an email to The Daily Signal:

The separation of church and state was to protect the church from the state, not the state from the church. It was to protect our nation from coming under the rule of one particular denomination, such as happened in Great Britain, not to keep men and women of faith out of the government.

“We are reading the Word of God on the grounds of our courthouses,” she added, “because we as a nation have turned from our biblical foundations and our nation is in big trouble.”