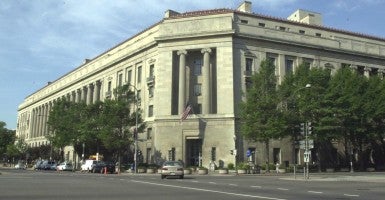 The Senate may take steps to end a Justice Department slush fund that has channeled millions of dollars in banking settlements to outside organizations, including left-wing groups such as La Raza and NeighborWorks America.

The Justice Department currently allows corporations found guilty of wrongdoing to pay a portion of their financial penalty as a donation to certain preapproved nonprofit groups.

“In 2011, the Department of Justice directed $30 million from a banking settlement to go toward left-leaning nonprofit groups,” Lankford’s office wrote in a press release, “like the National Community Reinvestment Coalition and NeighborWorks America.”

Conservative opponents of the practice charge that it not only bankrolls liberal groups, but also circumvents congressional authority. Lankford called it the “definition of abuse.”

“When the Department of Justice agrees to settlements on behalf of the U.S. government that includes financial penalties,” Lankford said in the four senators’ release, “it is not their job to force penalty money to be paid in the form of donations to third parties of their choice.”

In the wake of the 2008 financial crisis, banks found guilty for their role in inflating the mortgage bubble paid millions in penalties. In some cases the Justice Department would allow donations to third parties to be counted twice toward their fine.

While collecting billions, the Justice Department is able to collect a fee of up to a 3 percent to pay for processing debt litigation. A majority staff report commissioned by Sen. Ron Johnson, R-Wis., revealed that the Justice Department had collected $575.7 million in fees from JPMorgan, Bank of America, and Citigroup.

Hatch said in the release:

Settlement payments should be used to redress harm, not line the pockets of groups that government lawyers happen to favor. This bill will prevent the Department of Justice from continuing to treat settlement agreements as a source of free money for pet projects.

“The Department of Justice is supposed to work for all Americans, not just whichever special interests are favored by whoever is currently in this White House,” Lee said in the release.

The legislation mirrors a similar bill introduced by Rep. Bob Goodlatte, R-Va., chairman of the House Judiciary Committee. The House version is expected to come up for a vote before the end of June.

Goodlatte introduced a similar measure as an amendment to last year’s omnibus spending package. It was stripped out of the bill when it advanced to the Senate.

As a stand-alone piece of legislation, though, it’s unclear whether Lankford’s bill could reach the 60 votes necessary to achieve what’s known in the Senate as cloture and advance for a vote.