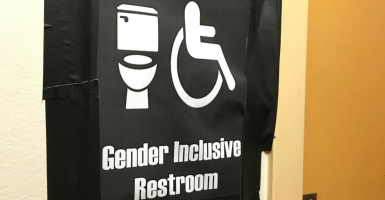 A Virginia school board facing a lawsuit over a policy that bans transgender students from using bathrooms and locker rooms that match their preferred gender identity due to bodily privacy concerns of other students asked the U.S. Supreme Court on Tuesday to hear its case.

The school board instead requires Grimm to use “alternative, private” facilities, such as unisex, single-stall restrooms.

If the Supreme Court decides to hear the case, the outcome could go a number of ways. The court could issue a blanket ruling on whether gender identity is included in Title IX, the federal law banning discrimination on basis of sex, or, it could issue a more narrow ruling. An example of that would be the court determining whether or not the 4th U.S. Circuit Court of Appeals was correct in deferring to the Department of Education in the G.G. v. Gloucester County School Board case.

“[The] solution of providing three single-stall unisex restrooms that anyone could use was a practical, nondiscriminatory answer that met everyone’s interests and properly balanced the needs of transgender students with other students’ right to bodily privacy,” Troy Anderson, chairman of the Gloucester County School Board, said in a statement to The Washington Post.

“This case is one of national significance.”

Grimm, in a press release last week, argued that transgender kids “should not have to sue their own school boards just for the ability to use the same restrooms as everyone else.” The student is being represented by lawyers at the American Civil Liberties Union.

Grimm’s case received national attention in April, when the 4th Circuit sided with the Obama administration’s interpretation of Title IX, which says schools must allow transgender students to use facilities that match their gender identity. This was the first federal court in the country to address the issue of whether Title IX applies to transgender students.

While many took the court’s ruling as a win for LGBT students, the decision did not grant Grimm access to the boys’ restrooms and locker rooms. Instead, the 4th Circuit sent the case back to a lower district court to decide. The appeals court directed the district court to defer to the Obama administration’s interpretation of Title IX, but left the school’s current policy in place until the case is settled.

Although the Obama administration cited this case when it issued a sweeping “dear colleague” letter mandating that schools allow transgender students access to the bathrooms that match their gender identity, Matt Sharp, a conservative legal expert at Alliance Defending Freedom, says the case is far from settled.

When sending the case back to the lower courts for review, Sharp said, the judges “didn’t even look at the privacy issue,” and specifically asked the lower courts to consider that factor when determining their final ruling.

“They said, we’re not really looking at the constitutional privacy concern, so that may be something for the lower court to look at,” he said. “So it definitely could go back to the lower court and the lower court could say, ‘I’ve looked at this again and even giving the Department of Education’s interpretation of controlling deference, I still think the constitutional right to privacy of these other students outweighs that and the school district is right to have a policy that properly balances those rights.’”

Prior to that, in October 2015, the Obama administration filed its own friend-of-the-court brief in support of Grimm.

“[The Gloucester County School Board] restroom policy denies G.G. a benefit that all of his peers enjoy—access to restrooms consistent with their gender identity—because, unlike them, his birth-assigned sex does not align with his gender identity,” the administration wrote.

As for whether the Supreme Court will actually accept the case and settle the transgender bathroom debate, Sharp said, “That’s probably the biggest question mark.”