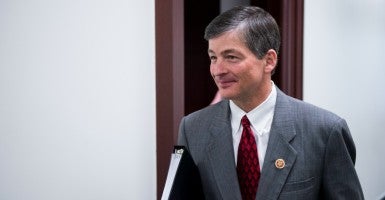 House Republicans are priming the pump for the next president to overhaul much of the financial regulation enacted in the aftermath of the 2008 global market downturn. The GOP plan would repeal and replace most of the Dodd-Frank financial overhaul with a more market-based regulatory scheme.

As part of the GOP’s “A Better Way Agenda,” House Financial Services Chairman Jeb Hensarling, R-Texas, was scheduled to unveil details of the simpler, yet stricter, regulation Tuesday morning at the Economic Club of New York.

“In a phrase,” he said, summarizing the Republican plan in prepared remarks obtained by The Daily Signal, “we need economic growth for all and bank bailouts for none.”

Hensarling blames Washington, not Wall Street, for that downturn.

“It wasn’t deregulation that created the great financial crisis of 2008, it was mostly dumb regulation by the Washington elite,” Hensarling told The Daily Signal on Monday before the speech. “And there were none dumber than those compelling Fannie Mae and Freddie Mac to loan money to people for homes they couldn’t afford to keep.”

Originally proposed by President Barack Obama and heralded by proponents as the greatest expansion of government control of banking and financial markets since the Great Depression, the mammoth Dodd-Frank Act of 2010 was supposed to prevent another fiscal crisis.

Named for its principal authors, Sen. Chris Dodd, D-Conn., and Rep. Barney Frank, D-Mass., the law imposed more government regulation on nearly all aspects of the financial services industry. It passed along party lines: by a vote of 237-192 in the House and 60-39 in the Senate. Neither Dodd nor Frank remains in Congress.

Citing economist Friedrich Hayek’s book “Fatal Conceit,” Hensarling described the law’s 2,300 pages as an example of “Washington’s elite deciding they’re smarter and can somehow manage the economy better than the rest of us.”

Central to the Republican replacement for Dodd-Frank is a regulatory offramp. Under the Hensarling plan, banks that “hold high levels of capital and maintain a fortress balance sheet,” he said in his speech, can escape much of the Dodd-Frank regulation.

Though larger banks would have to raise more capital, Hensarling said, the requirement wouldn’t have much of an impact on the books of smaller, more local lending institutions. Either way, he argued, control remains with the bank.

Ownership of risk is the biggest difference between the new GOP plan and the Dodd-Frank regulatory scheme, Hensarling told The Daily Signal.

The plan would encourage market discipline, what he described to The Daily Signal as “having your own money at risk as opposed to having a taxpayer backstop which provides privatization of profits and socialization of losses.”

Without government loan guarantees and under the new capital requirements, Hensarling told members of the Economic Club of New York  they may see more failure for financial institutions once deemed too big to fail.

In an ironic twist, Hensarling told The Daily Signal, he believes the GOP plan will do away with bailouts—something the Dodd-Frank law purported but failed to do. Instead, the GOP plan creates new avenues for controlled bankruptcy.

Troubled megabanks with more than $50 billion worth of assets would qualify for an entirely new bankruptcy process, not multibillion dollar packages given to lending institutions such as Citigroup, Goldman Sachs, and Morgan Stanley.

“Some large firms will likely become smaller because the credit they now obtain will be priced according to their inherent risk of failure without implicit government guarantees,” Hensarling said in his New York speech. “As a result, failure—when it does happen—will be more contained.”

The Hensarling plan takes steps to more aggressively enforce laws against fraud, self-dealing, and insider trading by instituting new penalties, like doubling and tripling fines in some cases.

It also would change the structure of the Consumer Financial Protection Bureau, a government agency created by the Dodd-Frank that Hensarling described in an advance copy of his speech as Orwellian.

“We know the best consumer protections are competitive, transparent, and innovative markets, vigorously policed for fraud,” Hensarling said. “So the penalties we have in our plan go way further than anything Dodd-Frank conceived of.”

In the current political climate, Hensarling’s plan is a political impossibility. Even if the proposal advanced out of Congress, it wouldn’t make it past the White House.

Last week in Elkhart, Indiana, Obama described any plan to do away with Dodd-Frank as “crazy.”

“I don’t care whether you are a Republican or Democrat or an independent, why would you do that?” Obama said. “Less oversight on Wall Street would only make another crisis more likely … How can you say you are for the middle class and then you want to tear down these rules?”

Hensarling responded by calling the president a “liberal ideologue” and accused him of trying “to turn America into a European social democracy.”

“The ultimate goal of the left is to turn our large, money-centered banks into the functional equivalent of utilities so that Washington can politically allocate credit,” Hensarling told The Daily Signal.

Increased regulation has hurt smaller banks in particular, he said, and the left is “very happy to let community-centered banks wither on the vine.”