72nd D-Day Anniversary: All Who Serve Are a Part of the Greatest Generation 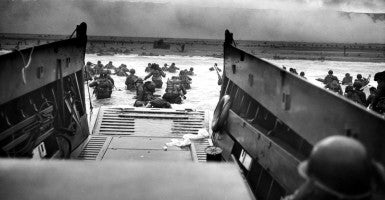 Stop your average American on the street and ask them, “What happened on June 6?” Surprisingly, a few might recall that on a dreary morning while the low tide lapped lazily on the rocky coast of Normandy, France, brave men in battle armor no thicker than an olive drab shirt grimly headed toward Hitler’s Atlantic Wall.

There is nothing special to mark the 72nd anniversary of the D-Day invasion during World War II. Nothing special—other than the men themselves.

That 18-year-old struggling up the steep bluffs of Omaha Beach while tracer rounds flashed overhead would be 90 years old now, eyes flickering, still alive with the memories of that unforgettable day. Often forgotten is that the fight for Normandy did not end there. Some of the toughest fighting in World War II happened in the six weeks after D-Day as the allies battled to gain a foothold in France and set the stage for the campaign that liberated Western Europe.

These were battles and a war worth winning. If there was ever a war for freedom’s sake, World War II was certainly it.

Dictators never dreamed larger. Germany’s Adolf Hitler planned to colonize all of Eastern Europe, after exterminating or expelling the local population. He would rule the Reich from “Germania,” the world’s largest city, and construct the greatest bridge ever built by man, making San Francisco’s Golden Gate Bridge look like a freeway overpass.

Hitler would cleanse his lands of the handicapped, mentally challenged, gypsies, homosexuals, and Jews. They would all be killed. He would bring German immigrants back from America to repopulate the homeland.

The appetites of others were only slightly more modest. The fascist dictator of Italy, Benito Mussolini, longed for a vast Mediterranean empire mirroring ancient Rome.

Japanese Prime Minister General Hideki Tojo envisioned an empire that stretched the width of the Pacific to Alaska and the coasts of Canada and the Northwest United States, a conception laid out in “The Land Disposal Plan in the Greater East Asia Co-Prosperity Sphere,” a 1941 document prepared by the Imperial Ministry of War.

If they had their way, all of humanity would have lived under an iron yoke.

In saving freedom’s future, the men and women who served in World War II justly earned the moniker the “greatest generation.”

But truth be told, every generation of Americans that serves in the armed forces to protect our safety and liberty is the greatest generation.

The soldiers we lost in a stateside accident are every bit part of the greatest generation as the kids that clambered up the cliffs in Normandy. They died serving us.

But every day, on the anniversary of great moments of history like D-Day, and unremarkable days not recorded on stone monuments anywhere, Americans wear their nation’s uniform in defense of us.

We should remember them every day.