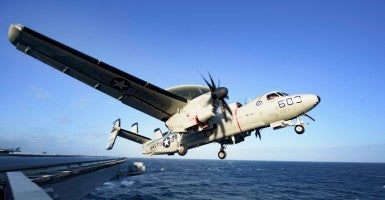 The Senate will soon start debating the annual defense policy bill. This bill is particularly critical now when threats are rising, from state-sponsored cyberattacks to Russian aggression, to terrorism at home and abroad.

At the same time, our military is getting smaller and weaker. Unfortunately, the Senate bill is a mix of good and bad policies, and for the sake of our national security, this bill needs to be improved.

The Marines are pulling aircraft parts out of museums. The Air Force is cannibalizing planes to keep other planes flying. Three quarters of Navy F-18 fighter aircraft are not ready for combat.

The U.S. military today is getting smaller and is struggling to train its people and maintain its equipment due to a combination of high demand and a 25 percent cut to its budget. While we don’t yet know all the details of the recent military plane crashes and the Fort Hood tragedy, we do know that serious and fatal accidents are on the rise. While accidents always happen, senior military leaders believe the rise in the overall rate of serious accidents is due to the lack of funding for training and maintenance.

The Marines are pulling aircraft parts out of museums. The Air Force is cannibalizing planes to keep other planes flying. Three quarters of Navy F-18 fighter aircraft are not ready for combat. And only one-third of Army brigades are prepared for war. In short, our military is not prepared to defend the vital interests of the United States.

Given the threats facing our country and the current status of our military, we should ask one simple question about the Senate defense bill: Does it start rebuilding our military?

The bill, formally known as the National Defense Authorization Act for fiscal year 2017 (NDAA), doesn’t do enough. Sen. John McCain, R-Ariz., is the primary author of the NDAA, and he is keenly aware of this gap, and he hopes to address it by offering an amendment to increase the defense budget by $17.9 billion.

If successful, this amendment would take major steps toward rebuilding the military: it would grow the size of the Army and the Marine Corps, it would buy more ships for the Navy and more planes for the Air Force, and it would provide more funding for training and maintenance for all the services.

If this amendment doesn’t pass, this bill will not start rebuilding our military. There is one problem with the McCain amendment—the defense funding increase does not come with cuts to other parts of the federal budget that are less important. To reinvest in our armed forces while being fiscally responsible, defense funding should be increased and other parts of the budget should be decreased.

While the budget is the biggest issue in the Senate NDAA, there are other provisions in this bill that are a mixture of good and bad. On the good side, the bill takes important steps in line with recommendations from Heritage analysts on military health care, reforming commissaries, and prohibiting military exercises with Cuba.

The bill also takes good steps on expanding the national missile defense policy and investing in space-based missile defense. The bill also prohibits the defense budget from being used for non-defense research, which is doubly important when the military is already short on funding.

Unfortunately, the good provisions are mixed in with a number of bad ones. Perhaps most controversially, the bill contains a provision requiring women to register for the Selective Service and be eligible for a future military draft. In parallel, it creates a national commission on public service, an idea that Heritage analysts have expressed concerns about in the past.

The bill also contains the New Balance provision to prohibit service members from buying running shoes made in other countries, which even New Balance’s hometown paper thinks is a bad idea.

The bill also opens the door to designing and planning a prison in the U.S. to hold terrorists currently at Guantanamo Bay. But the biggest problem is the one outlined above: The bill currently supports President Barack Obama’s proposal for a smaller and weaker U.S. military.

The Senate NDAA contains a number of good provisions as well as some bad ones, but it doesn’t start rebuilding the military. It will take years of strong defense budgets to properly do this. The Senate should start that rebuilding process now instead of going along with Obama’s plan for a smaller, weaker military.