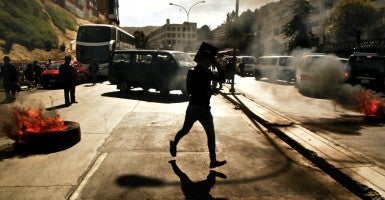 Caracas has now the highest murder rate in the world—120 per each 100,000 inhabitants in 2015. It is literally safer to walk the streets of Kabul. (Photo: Christian Lombardi/ZUMA Press/Newscom)

Gabriel de Arruda Castro is a member of the Young Leaders Program at The Heritage Foundation.

It seems the “Socialism of the 21th Century” is really no different from socialism from the past.

Venezuela’s current tragedy, simultaneously culminating in food shortages, a crime epidemic, and an energy collapse, is the latest example of why centralized planning economy does not work—and how it is indistinguishable from tyranny.

In the South American country, even the most basic services and products are becoming inaccessible as a result cronyism, interventionism, and a controlled prices policy. The government now works only two days a week in order to diminish the constant electricity blackouts. The inflation rate is the highest in the world: it is expected to be at 720 percent by the end of 2016.

Yes, you can still go to McDonalds in Venezuela—but you have to be willing to spend more than $130 for that side of french fries. And you’ll have to enjoy those $130 fries without a Coke—since the company suspended its production in the country due to a lack of sugar.

Another, more tragic consequence of the ideological delusion of Hugo Chávez and his successor President Nicolás Maduro is the loss of human lives.

Caracas has now the highest murder rate in the world—120 per each 100,000 inhabitants in 2015. It is literally safer to walk the streets of Kabul.

Caracas has now the highest murder rate in the world—120 per each 100,000 inhabitants in 2015. It is literally safer to walk the streets of Kabul.

The recent aggravation of the crisis had especially cruel consequences on the weakest. Children are dying because of lack of basic medicine, electricity, and functional equipment such as incubators.

To the tragedy, Maduro answered with buffoonery: “I doubt that anywhere in the world, except in Cuba, there exists a better health system than this one.”

While that might be somehow surprising to those who believe in socialism, the turmoil in Venezuela was predictable.

As The Heritage Foundation’s Index of Economic Freedom demonstrates, the situation in Venezuela started deteriorating right after Chávez took control of the country almost two decades ago.

During that period, Venezuela’s score has dropped more than any other nation’s, plummeting from 59.8 to 33.7. Maduro, who became president after Chávez’s death in 2013, went further on the authoritarianism path.

The former mayor of Caracas, Antonio Ledezma, and opposition leader Leopoldo López, were thrown in jail for political reasons. Currently, Venezuela has more political prisoners than even Cuba.

The economic model of “Chavismo” is anything but sophisticated. Venezuela owns the largest oil reserves in the world, and it is one of the top 10 oil exporters. The “Socialism of the 21st Century” consisted of spending this money with populist and unsustainable social programs while disrespecting property rights and neglecting the country’s infrastructure. Protests against members of the Bolivarian National Guard in downtown Caracas, Venezuela, on June 2. The protest took place over long lines and food shortages at supermarkets as Venezuela suffers from serious shortages of basic products that include sugar, milk, flour, coffee, and butter. (Photo: EPA/Miguel Gutierrez/Newscom)

Now that the oil prices are going down, Venezuela has run out of money. Maduro’s regime is also losing support among his neighbors.

The Venezuelan opposition, who since last year has the majority in the National Assembly, is now collecting signatures in order to call a referendum that could end Maduro’s days in power.

Meanwhile, the Organization of American States will also debate the possibility of evoking its democratic charter against Venezuela, what might result in an unprecedented suspension.

It seems, however, that Maduro will double down on the authoritarianism. He told the organization’s secretary general to “stick the democratic charter wherever it fits ” and announced he will prosecute the opposition leaders who asked for the intervention of the OAS.

Even though it is unclear when (and how) Venezuela will get rid of its socialist policies, the current crisis might end up creating the conditions for the rebirth of freedom in that country.