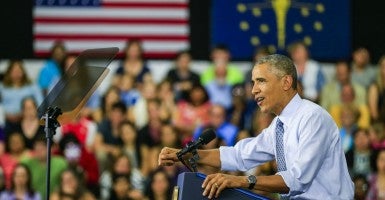 On Wednesday, President Barack Obama took an economic victory lap in Elkhart, Indiana. The Bureau of Labor Statistics’ employment report, which came out Friday, shows he was far too optimistic.

Both the household and payroll surveys showed employment growth slowing to a crawl in May, while hundreds of thousands of Americans stopped looking for work. Seven years after the recession officially ended, the economy is not out of the woods.

The household survey showed even slower job growth (+26,000), although the difference between the two surveys was not statistically significant. If this hiring rate continues, job creation will not keep pace with population growth and unemployment will rise.

This was not good news; it happened because the number of Americans outside the labor force jumped by 664,000 in May. The government does not count people not looking for work as unemployed. Their exit caused the labor force participation rate to drop 0.2 percentage points, and pushed down the unemployment rate.

More discouraging news came from part-time employment. The number of Americans employed part-time for economic reasons jumped by almost 500,000. In May, many more workers who wanted full-time hours could not find them.

The only bright spot in the report came in wage growth. Average hourly earnings increased 5 cents in May and have risen 2.5 percent over the past year. Since inflation has grown just 1.1 percent over that period, real wages have grown roughly 1.4 percent in the past 12 months. That represents solid growth by historical standards. But it may not last if the labor market weakens.

Obama has overseen the weakest recovery of the post-war era, and this jobs report illustrates just how fragile this recovery has been.