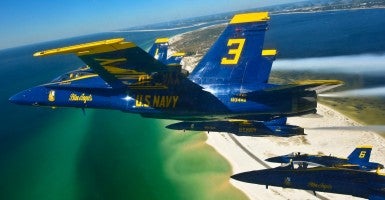 There are only a handful of organizations whose sole mission is to travel across the United States and allow Americans to see their military up close and personal. Among them are two teams that showcase the professionalism and leading edge technology of the most powerful Navy and Air Force the world has ever known.

They do it in a way that draws crowds filled with butchers, school teachers, farmers, dry cleaners—folks from every walk of life who would otherwise never get a glimpse of their military. A military they each had a hand in crafting. Some may just want to see their taxes at work—but others want to feel the rush, the excitement associated with being next to people who are willing to give their all for this nation. No matter how outwardly stoic they may seem to their families, every man and woman in eyeshot is touched to the core with same pride you and I feel every time we see them fly.

The Thunderbirds and Blue Angels collectively perform over 140 demonstrations every year. To do that, they fly six days a week, for eight straight months. And while both teams do their level best to minimize the dangers associated with executing the demonstration, they know the risk, and the bonds within grow only closer living in it. I know that feeling well, and my heart aches for the family of Capt. Jeff Kuss, and for a team no longer whole without him. Over the next several weeks, the Thunderbirds and Blue Angels will pause to take stock of their respective operations. For the Blues, that will be particularly hard as they mourn the loss of their teammate, brother in arms—their friend. And then they will slowly move to rebuild.

Teams of safety investigators are even now moving to the mishap locations to begin piecing together the timeline, eyewitness accounts, and clues surrounding the two accidents. Once there, they will move tirelessly until they know the cause for each accident, and then do everything required to ensure the next demonstration flown is that much safer.

While they take stock, maybe we should all take a minute or two to do the same thing—to pause long enough to realize what we have in our incredible military, and in these two extraordinary organizations that bring that surge of pride to our door. And maybe then, take one more moment to say a prayer of thanks for Capt. Jeff Kuss, and people just like him who are standing watch over us, still.