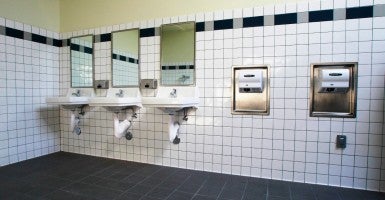 “As parents, we decided we were not going to force our children to make the decision between confusion, humiliation, and embarrassment,” Michigan parent Matt Stewart says. (Photo: Eduardo Contreras/ZUMA Press/Newscom)

A Michigan family pulled their three sons out of public school for a week after finding out from their 9-year-old son that he had to share a restroom with a biological girl.

On May 13, the departments of Education and Justice issued a directive to schools around the nation, threatening to take away federal school funding if districts do not equate gender identity as a student’s biological sex.

>>> What Obama’s Bathroom Directive Really Does

The dad who pulled his kids out of school, Matt Stewart, told The Daily Signal that his 9-year-old son, who attends Southwest Elementary School in Howell, Michigan, informed him on Friday, May 20, that a girl was using the same restroom as him, at the same time.

“On Monday we had a conversation with our son’s teacher and the principal,” Stewart said. The next day, on May 24, Matt and his wife Lindsay removed their three boys, all who attend Southwest Elementary, from Howell Public Schools.

Stewart says that Erin MacGregor, the school district superintendent, suggested that his son could be accommodated with a single-use or unisex bathroom if the 9-year-old was uncomfortable with the current bathroom situation.

“As parents, we decided we were not going to force our children to make the decision between confusion, humiliation, and embarrassment,” Stewart told Kim Russell with WXYZ 7 Action News, Detroit’s ABC TV station.

A spokesperson for Howell Public Schools told The Daily Signal in an email that the school district could not comment regarding if a biological girl had been allowed to use the boys restroom at Southwest Elementary School, as the issue is a matter of student privacy. “Single-use bathrooms are available to any student who wishes to use one,” the spokesperson noted in reference to the accommodations available for Stewart’s son.

Stewart says that MacGregor confirmed with him on May 24 that there was no district-wide policy in place on this issue and that the superintendent had made the final decision allowing students to use the restroom of their choice, without prior notification to parents. The school district spokesperson confirmed to The Daily Signal that this information is correct.

On May 25, parents were informed through email of the school district’s intent to comply with President Barack Obama’s administration’s transgender student directive.

Meanwhile, Stewart was “hopeful that the superintendent and school board would be open to creating a policy where every student felt comfortable.”

“We are hopeful as parents that that would be a discussion that would involve members of the community in an open and transparent manner,” he said.

During the week Stewart’s kids were not in Howell Public Schools, the dad says the school district took “a 180” on the issue after those in the community spoke up.

The school district “changed their position” on May 31, Stewart told The Daily Signal.

“At Howell Public Schools we work tirelessly to create an inclusive environment where all students feel welcome, safe, and secure,” a statement given to The Daily Signal by a spokesperson for the school district says. The school district has decided to press pause on the Obama administration’s transgender student directive while it gathers feedback on the issue. The school district’s statement says:

At this time, we do not currently have any students using a restroom other than that designated for their biological gender, or requesting to do so. In light of this, we are pausing on the federal guidance issued to all school districts across the nation in a joint letter on transgender students issued by the Department of Justice and Department of Education on May 13, 2016, while we work to provide opportunities in the coming weeks to gather feedback on this matter. This feedback will further inform the board of education as they engage in a thoughtful approach to shape policies, practices, and guidelines consistent with legal requirements. Like districts across the state and country, Howell Public Schools and its board of education are staying apprised of the changing federal, state, and local dynamics relating to this matter.

“We have never sought to deprive any other student of their rights only to protect the rights of our own children,” Stewart said. He added:

This is an example of how we can make a difference in our communities. An injustice was brought to our attention and Lindsay and I spoke out, made others aware and shined a spotlight on what we felt was a hasty decision which was not well thought out. We appreciate the district’s responsiveness and are hopeful that they will be more cautious and thoughtful in the future on decisions which affect so many.

According to Stewart, MacGregor, the district’s superintendent, confirmed with him that Howell Public Schools will “only provide access to restrooms designated for a student’s birth gender or to a single-user facility” while the school district works to finalize policies and guidelines.

“We also trust that as they seek wisdom on the correct course that they will give parents the opportunity to have a voice,” Stewart said. “And when that happens we will speak up. For now, we will be sending our kids back to school with their assurances.”