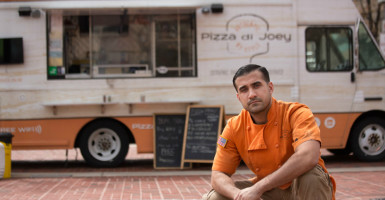 Joey Vanoni, owner of Baltimore's Pizza di Joey, is challenging a city ordinance prohibiting him from parking his food truck within 300 feet of a restaurant that has pizza on its menu. (Photo: Institute for Justice)

When Joey Vanoni returned to the United States from Afghanistan in 2013, he went to work putting his dream of owning a pizza business into action.

Vanoni knows good pizza. He was born and raised in New Jersey and began making pizza at a pizzeria when he was in high school. The reservist has lived in many cities across the country, all of which had their own pizza parlors claiming to sell New York-style pizza, and none of which quite made the cut.

So, having grown up on real New York-style pizza, Vanoni looked at his business as a chance to educate the public on what that truly means.

And Vanoni is a good teacher.

“It’s a calling and an opportunity to try to teach people what real New York pizza is,” Vanoni told The Daily Signal.

Before launching Pizza di Joey, Vanoni explored the food truck market in Baltimore and decided Charm City was the perfect place to “stretch our legs” and open a pizza truck in a city where not one existed.

But when the Navy veteran was writing his business plan and researching the city’s regulations, he learned about Baltimore’s proximity ban, which restricts mobile vendors from operating within 300 feet of a brick-and-mortar business selling the same type of food, merchandise, or service.

Vanoni moved forward with his plans to open Pizza di Joey, but he’s limited to parking his food truck at special events and in office parks within Baltimore’s city limits where he knows he’s not violating the ban.

“In my estimation, it’s pretty apparent this law really only serves the interest of brick-and-mortar restaurants,” he said. “There’s no conceivable good reason to have this law in place, and I think it’s really unjust and anti-American.”

Vanoni has operated on the street in Baltimore no more than 10 times and is unable to sell pizza in the city’s more vibrant and growing neighborhoods—Fells Point, Canton, and Federal Hill—where he’s fielded requests from residents asking him to park his food truck there.

Having been dealing with Baltimore’s proximity ban for two years now, Vanoni and fellow mobile vendor Nikki McGowan, who owns Madame BBQ food truck, are working with the Arlington, Va.-based Institute for Justice to challenge the ordinance.

“The law is extremely limiting to my business based solely on what I serve,” Vanoni said. “It doesn’t affect public health and safety, the general welfare of the public, nothing, aside from just shielding a specific industry.

“There’s nothing else. There’s no other purpose to it.”

The Institute for Justice, a public interest law firm, filed its lawsuit against the city on behalf of Vanoni and McGowan in May.

Greg Reed, a lawyer with the Institute for Justice who is representing Vanoni and McGowan, said Baltimore’s ordinance is anti-competitive, and therefore a violation of the Maryland Constitution.

“The role of government is to protect the health and safety of the public,” Reed told The Daily Signal. “It’s not to choose winners and losers in the marketplace based on who has the most political influence.”

Reed and the Institute for Justice have successfully challenged ordinances governing mobile vending in San Antonio and Chicago, and the law firm is working to overturn what it says are protectionist regulations making it harder for new businesses to break into new markets.

“I don’t care where you are on the spectrum in terms of being liberal or conservative,” Reed said. “Nobody believes that government’s role is to favor one individual or company over another. We knew that back in social studies class back in fifth grade.”

“When Pizza di Joey in Baltimore can’t park in front of a pizzeria but a taco truck can, a barbecue truck can, a noodle truck can, clearly we’re only talking about economic protectionism,” he continued.

For food trucks looking to access areas of heavy foot traffic in Baltimore, where there is also a high volume of restaurants, the risk may not be worth the reward, Reed said.

According to the city, violating the 300-foot proximity ban can result in a fine of up to $500, and mobile vendors can have their license suspended or revoked for doing so. Violating the ban is a misdemeanor.

Restaurant owners can call the police if they suspect a food truck is operating less than 300 feet away from their business, and it’s up to the mobile vendor to move or prove their menus differ.

In the two years since he’s opened, Vanoni has only had the police called on him once for an alleged violation of the proximity ban. Vanoni showed officers who arrived a map of nearby restaurants selling pizza and verified they were farther than 300 feet away.

After confirming the Pizza di Joey food truck was parked the legal distance away, the officer later came back for lunch and received a discount, as all civil servants, active duty military, and veterans do, Vanoni recalled.

McGowan hasn’t been visited by law enforcement, though her friends have. The “madame” of Madame BBQ, McGowan, chooses not to park her food truck in Baltimore, operating mostly in Howard County, and instead limits her business activities within the city limits to private events and festivals.

“I wanted to do the food truck for the freedom, but the freedom isn’t there,” she told The Daily Signal. “For me to go into the city, I don’t want to risk not only the fine, but I also don’t want to lose all my inventory with the truck.” Nikki McGowan, owner of Madame BBQ, is challenging a Baltimore ordinance prohibiting her from parking her food truck within 300 feet of a restaurant that sells similar food. (Photo: Institute for Justice)

‘Much Ado About Nothing’

Vanoni originally decided to open a food truck instead of a brick-and-mortar restaurant because of the ability it gives him to widen his customer base and travel to desirable neighborhoods.

The Navy veteran, who struggled to find a job after returning from Afghanistan in 2013, hires fellow veterans, and he feels that lifting Baltimore’s 300-foot proximity ban will not only help him expand, but also give more veterans jobs.

“Not having access to foot traffic during high volume times, it’s extremely limiting. It hurts my bottom line,” he said. “If I had more business, I could give [veterans] more hours in terms of logistical stuff. It limits my sales and my ability to give veterans more opportunities to make money.”

Before launching his lawsuit against the city, Vanoni, a resident of Baltimore, reached out to his city councilman, Edward Reisinger, through email, mail, and has made trips to City Hall to discuss the proximity ban in person.

Neither Reisinger’s office nor Baltimore Mayor Stephanie Rawlings-Blake’s office returned The Daily Signal’s requests for comment. Anthony McCarthy, a spokesman for the mayor, said in a statement earlier this month that the debate over the ban was overblown.

“The food truck issue is much ado about nothing,” McCarthy said. “The mayor and City Council have the authority to regulate public rights of way, and the city frequently places limitations on what is and is not permitted in various locations.”

Both McGowan and Vanoni disagree.

“My business isn’t much ado about nothing,” McGowan said. “It’s my dream, and I love the city.”

“We have constitutional issues, veterans issues, employment issues and economic issues at stake here,” he continued. “If City Hall deems that much ado about nothing, they are absolutely wrong, unless the economy is perfect and every veteran has a job and the Constitution is considered a suggestion.”