Under Obamacare, Small Business Owner Forced to Get Rid of Health Care Benefits or Face Fine Up to $500K 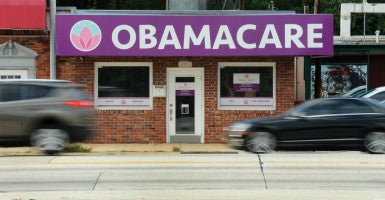 When Maryland business owner Thomas Kunkel first learned about the Affordable Care Act, he was excited about the prospect of the new health care law.

“From the small business standpoint, it was actually one of the first times I felt like a bit of a social program might actually benefit a small business,” he told The Daily Signal. “Usually it’s the opposite.”

Kunkel owns Full House Marketing and Print in Edgewood, Maryland, and employs 21 full-time workers and up to 10 part-time employees. While he doesn’t provide them with health insurance, Kunkel cuts his workers a monthly check through a Health Reimbursement Agreement.

Obamacare, he said, would allow a lot of his employees with pre-existing conditions to get insurance, especially those who had trouble purchasing coverage in the past.

“That was the biggest positive I saw,” he said.

But Kunkel, who previously worked in the health care industry, anticipated premiums and deductibles were going to rise as insurers worked to adjust to the changes to the health care market.

Under Kunkel’s agreement with workers, he pays a set dollar amount each month, and employees are free to purchase plans on the individual market, putting the money Kunkel provides them toward the cost of their premiums.

“It was actually allowing me to offer a medical insurance benefit to my employees without having to go through all of the challenges of a group plan,” he said of the Health Reimbursement Agreement.

But in September 2013, the IRS and Treasury Department issued guidance prohibiting businesses from using Health Reimbursement Agreements, which help workers pay for health insurance plans purchased on the individual market and other medical expenses. Businesses that integrate Health Reimbursement Agreements with group plans can still offer the benefit.

The Treasury Department said Health Reimbursement Agreements failed to satisfy specific provisions of Obamacare, such as the prohibition on annual limits for health benefits and the requirement that plans must include preventive care.

And for Kunkel, that left him forced to do away with one benefit that helped him retain employees and gave him a competitive edge when hiring.

“Before, I could at least say we don’t offer health care because there are a lot of options available on the individual market, but we do reimburse up to ‘x’ number of dollars a month,” he said. “I could sell that as a better plan than a group plan. But of course now I don’t have that to offer. It makes it tougher to hire and retain and to be competitive.”

‘A Little Betrayed and a Little Misled’

Prior to the Obama administration’s announcement, many small business owners were under the impression the Affordable Care Act would have little to no impact on them, especially because the law’s employer mandate created requirements for businesses with more than 50 employees.

However, small businesses are now faced with having to do away with a vital tool used for their employees or face hefty fines.

Kevin Kuhlman, director of legislative affairs for the National Federation of Independent Businesses, called the Treasury Department’s rule for small businesses a “solution in search of a problem.”

“They feel a little betrayed and a little misled,” Kuhlman told The Daily Signal. “It just has reduced flexibility for a lot of small businesses. These businesses with fewer than 50 employees were told 100 times, ‘Oh, you have fewer than 50 employees, the law doesn’t apply to you,’ and then Treasury quietly put out regulations that say you can no longer do this flexible benefit that we’re offering instead.”

“You either have to offer expensive group coverage, which you can’t afford, or you’re completely on your own, and you can’t help your employees,” he continued.

In February 2015, the Treasury Department delayed enforcement of the ban on Health Reimbursement Agreements until July 1, 2015. Despite the delay, Kunkel said many small businesses could be surprised with fines for not complying with the rule.

“I think many are not even aware of it still and could be subject to penalties,” Kuhlman said. “This is the first tax season that both employers and employees are filing their taxes. Discrepancies could appear there, and that could invite unwanted audits, which have costs in and of themselves, and then the potential penalties.”

In the wake of the Obama administration’s guidance banning the use of Health Reimbursement Agreements, a number of business groups have come out in opposition of the ban and are calling on Congress to reverse the rule.

In April, the U.S. Chamber of Commerce and 60 groups representing small businesses across a variety of industries sent a letter to Republican and Democratic leaders on the House Ways and Means Committee urging them to roll back the IRS’s regulation by taking up bipartisan legislation addressing the guidance.

That legislation, called the Small Business Healthcare Relief Act, has more than 90 Republican and Democratic co-sponsors in both the House and Senate. It would allow small businesses to continue providing employees with a defined reimbursement for medical expenses and health coverage.

“This arrangement has worked well for small businesses that can’t afford group insurance or don’t have human resources departments to manage a health care plan,” Sen. Chuck Grassley, R-Iowa, a main sponsor of the legislation, wrote in an upcoming op-ed. “ … It all made sense. Then Obamacare pulled the plug on it.”

Earlier this month, senators expressed concerns with the Obama administration’s decision to prohibit small businesses from helping employers through reimbursements.

Similarly, Small Business Committee Chairman David Vitter, R-La., reinforced concerns small businesses have with the fines that could be levied against them by the IRS for continuing to assist workers through Health Reimbursement Agreements.

Frank said any issues with the administration’s rule regarding Health Reimbursement Accounts were under the purview of the Treasury Department and not the Department of Health and Human Services, but said that his agency is focused specifically on expanding access to care.

“HRAs are not insurance. They are other health accounts, and they don’t meet the definition of insurance so one issue is that I think people conflate the two,” he told lawmakers. “There are provisions that if you have insurance and you want to use additional funds through an HRA, that’s permissible. What gets conflated in many corridors is where the line between HRAs and insurance are drawn.”

“What Obamacare has done in terms of small business coverage is, first, various provisions have increased the cost of the coverage through other regulations, including this one, and second, it has limited the available options for small business in terms of plan design and also possibly in same places the number of available insurers,” he told The Daily Signal.

Haislmaier also said that Obamacare is “premised on providing traditional kinds of insurance with traditional financing arrangements,” but added a layer of restrictions in terms of plans.

After Kunkel learned of the IRS’s new rules regarding Health Reimbursement Agreements, he began exploring options.

Kunkel looked into purchasing plans through the SHOP, or Small Business Health Options Program, exchange. However, insurance brokers warned Kunkel enrolling in the SHOP exchange could prove to be confusing, time-consuming and costly.

He also looked into offering his workers a group plan and selected one through Evergreen Health, Maryland’s co-op.

Though the group plan through Evergreen Health was among the cheapest Kunkel could find, not a single employee decided to enroll, as it was more expensive than individual plans.

Kunkel even raised some of his employees’ pay to help compensate for their lost reimbursements, but that caused some workers purchasing coverage on Obamacare’s exchange to lose subsidies or qualify for less.

“They’re good people. They’re good friends of mine, and most of them have worked for me for years,” Kunkel said of his employees. “It’s always tough when you’re taking something away from them, especially something like health care. You feel compelled to try to help out in some other way.”

Already this year, Kunkel has had two employees leave his company, citing health insurance as a major reason for leaving.

“I’m vying for qualified staff just like everybody else. The fact that I was contributing, I felt I was going above and beyond,” he said. “Then I had to be the person to take it away.”