Study Shows Those Who Claimed ‘Climate Debate Over’ Were Wrong 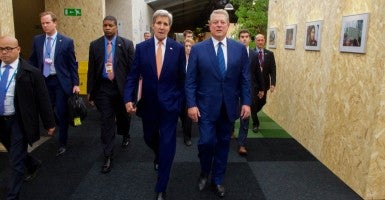 Last summer, the editor of Science wrote a commentary on climate change where she said, “The time for debate has ended.”

After appealing to policies based on economic knowledge she doesn’t have, she finished with speculation as to which ring of Dante’s Inferno would God designate for climate skeptics.

All in all, it was an awesomely unscientific tour de farce and totally depressing in that it came from one of the world’s two most prestigious science journals.

Of course the time for debate hasn’t ended—especially for the meaningful debate concerning how much impact carbon dioxide has on global warming.

The relationship under debate is how much warming will the world see from a doubling of carbon dioxide—which is called the equilibrium climate sensitivity.

Members of the climate-science community have placed markers on this debate that range from negligible to catastrophic. Given the editor’s bias, it is not surprising that Science does not publish many articles arguing for “negligible.”

So, it was a bit of a shock to find a story in the most recent issue that at least argued for “a lot less.”

The direct temperature effect of doubling carbon dioxide is generally estimated to be about one degree Celsius. However, that estimate assumes all other climate-impacting factors are held constant (which is unlikely to be the case).

There are a variety of feedback loops in the climate system that may amplify or moderate this increase.

One of the most critical feedback loops involves cloud formation. That is, what will the warming from additional carbon dioxide do to cloud formation?

Some types of clouds moderate warming, while other types amplify it. In addition, cloud formation may be impacted by other human activities.

This “other” category was the topic of the article in Science. Under study was the question of how much might human-caused air pollution stimulate temperature-moderating cloud formation?

One of the many puzzles that come from comparing climate model predictions to actual data is the decades of flat or declining world temperatures from about 1950 to the 1970s.

The lack of warming during the period contrasted significantly with rapidly increasing emissions of carbon dioxide.

So, instead of lowering the equilibrium climate sensitivity, the modelers input arbitrary amounts of sulfate-induced cloud formation to “fix” the models. In essence, the modelers argued that much of the warming was temporarily delayed by the increased cloudiness.

Since this delay couldn’t last indefinitely, the warming would come back with a vengeance and the higher estimates of the equilibrium climate sensitivity would be vindicated.

Now, the new Science article is saying “not so fast.” It seems the pre-industrial skies were probably not so cloud-free as had been assumed. That means man hasn’t clouded up the sky as much as thought and, therefore, modelers can’t explain away the lack of warming so easily.

As a consequence, the older estimates of the equilibrium climate sensitivity are biased to the high side.

One of the authors said, “the current best estimates of future temperature rises are still feasible, but ‘the highest values become improbable.’” Though some have already tried to downplay the significance of the research—it is a big deal.

All of the hype surrounding global warming masks the story that those advocating costly climate policies were actually telling—a story of a small chance of huge climate costs. If future warming is limited to the “most likely” values, it might get a little warmer, but there would be no catastrophic scenarios to lay out and, thus, no case to be made for blank-check climate policies.

There would be no imminent existential crisis, no hysteria, and no reason to demonize those who argue against incurring huge expenses for no benefit.

It would be OK to drive your car. It would be OK to burn coal in modern coal plants that already cut SOx, NOx, mercury, and particulate emissions by 86 percent to 99.8 percent. There would be no imperative for carbon taxes, cap-and-trade, or the Clean Power Plan and the trillions of dollars of lost income they would cause.

You could use whatever lightbulb you wanted. Your dishwasher wouldn’t have to run interminably. Creative minds could be devoted to making life better, not making it harder.

So, despite the command from Science’s editor, debate continues and things are looking better.