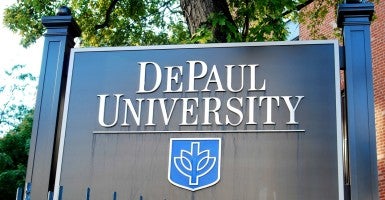 DePaul needs to ensure that security needs are provided by the university objectively and in a manner that is minimally intrusive on its students’ rights. (Photo: Flickr/who canitbe/CC BY-NC-ND 2.0)

Nathan Howe is a member of the Young Leaders Program at The Heritage Foundation.

Selectively charging outrageous security fees in order to make student leaders “voluntarily” shut down events that college administrations don’t like is a routine tactic for silencing dissent on campus.

But what happens when the students actually pay the fees and a speaker shows up? You’d think that at the very least you would have a number of bored security guards and one very safe speaker?

After DePaul University in Chicago changed its policies and overcharged the College Republicans for security at an event on campus, it ordered the security providers to “stand down,” even as some Black Lives Matter advocates physically took control of a stage and threatened to punch the speaker in the face.

The DePaul College Republicans were scheduling an event with a popular but highly controversial speaker, Milo Yiannopoulos, earlier this year.

They immediately hit a snag when they discovered that DePaul has a stated policy requiring a ratio of security to attendees of between 1:50 and 1:75. For their event of 550 attendees, DePaul was required to hire 8 guards for $960.

This might be difficult and might reduce the amount of events that occur on campus, because applying such a policy does place a burden on small student groups that have a hard time raising the money to fund such events.

Nevertheless, at least this policy was publicly available and evenly applied (except it wasn’t).

The DePaul College Republicans had to rely on crowdfunding and donations months in advance, only to have the university change the policy at the last minute, demanding hundreds of extra dollars for additional security less than a week before the event would take place.

According to Jorin Burkhart, an executive board member of DePaul College Republicans, “non-conservative groups are able to hold events without being required to have security.” At DePaul, the College Republicans hosting Yiannopoulos are stuck with an inflated bill.

The “security” meanwhile did nothing to stop attacks by assailants, one of whom even threatened to hit the speaker in the face. According to the event organizers, the administration had promised the College Republicans that it would remove disruptors from the event.

Chicago police were called to the scene, but they too were told by the DePaul administration to stand down, an order that made some of the well-trained police “irate” because they “wanted to do their job” and protect the students and speaker.

In a follow-up email to the student body, DePaul’s president made a tepid apology to the College Republicans—but only after expressing his intense dislike of “speakers of Mr. Yiannopoulos’ ilk,” who he claimed are “self-serving provocateurs,” whose “shtick” is “unworthy of university discourse.” This “apology” may provide some indication that the administration’s real goal in imposing costly additional security requirements on the College Republicans was to incentivize them to cancel the speaker’s appearance.

The university is supposed to protect its students physically as well as safeguard their rights on campus. DePaul not only failed to secure the students and the guest speaker, but they seemed to actively subvert the students’ rights and work against allowing the College Republicans to hold their event.

DePaul needs to ensure that security needs are provided by the university objectively and in a manner that is minimally intrusive on its students’ rights. And, of course, it needs to refund the College Republicans’ security fees.