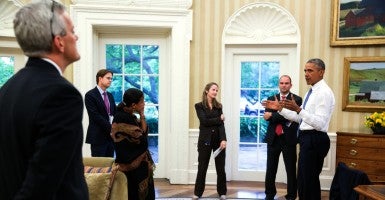 The Obama administration’s controversial efforts to sell the flawed Iran nuclear deal continue to reverberate, after Deputy National Security Adviser Ben Rhodes gave an ill-advised interview to The New York Times Magazine in which he bragged about the media “echo chamber” he built in collaboration with like-minded journalists and nongovernmental organizations.

Even observers who agreed with the administration’s Iran policy were stunned by the arrogance of Rhodes, an aspiring novelist with a graduate degree in creative writing. For example, Tom Ricks, a veteran defense reporter, blasted Rhodes in a blog: “To be cynical and ignorant and spin those things into a virtue? That is industrial-strength hubris.”

The Associated Press last week reported on the activities of one of the NGOs mentioned by Rhodes, the Ploughshares Fund. Led by Joseph Cirincione, who was an adviser on nuclear issues for the 2008 Obama presidential campaign, the Ploughshares Fund’s stated mission is “to reduce and ultimately eliminate the world’s nuclear stockpiles.”

The Ploughshares Fund, which boasted about its role in supporting the Iran nuclear deal, was a major hub funding the Arms Control Association, think tanks such as the Atlantic Council and Brookings Institution, and lobbying groups such as J-Street, a liberal Jewish political action group, and the National Iranian American Council, which also pushed for the nuclear deal.

Perhaps the most egregious funding decision made by the Ploughshares Fund regarding the Iran nuclear deal was its $70,000 grant to Princeton University to underwrite the activities of Seyed Hossein Mousavian, a former Iranian ambassador and nuclear spokesman. This essentially amounted to subsidizing Iran’s propaganda efforts inside the United States.

Although Mousavian was purged during President Mahmoud Ahmadinejad’s administration, he worked closely with Hassan Rouhani, now Iran’s president, in nuclear negotiations with European diplomats up until 2005 and he continues to defend Iran’s nuclear efforts.

The Ploughshares Fund in turn received funding from the Open Society Institute founded by George Soros, the billionaire currency speculator who has funded many leftist and liberal organizations.

The deceptive narrative pushed out by Rhodes, with the help of the Ploughshares Fund, already has crumbled in the face of reality.

Rhodes helped concoct the false narrative that the administration began its negotiations in 2013 to take advantage of a more “moderate” Iranian leader, Rouhani, who was elected president that year. But the negotiations actually had begun many months before Rouhani’s election.

Even more misleading is the administration’s argument that the agreement can bolster Iranian “moderates” in a power struggle with hard-liners. But the real struggle in Tehran is between hard-liners and ultra hard-liners.

Rouhani’s faction is more pragmatic than the ultra hard-liners, but it is by no means “moderate.” Rouhani has worked closely with Ayatollah Ali Khamenei, Iran’s supreme leader, for many years and they continue to collaborate as a “good cop/bad cop” tag team.

The real moderates were purged in 2009 after they sided with millions of Iranians protesting the rigged elections that handed a second term to Ahmadinejad.

The nuclear agreement has enabled Tehran to have its cake and eat it too. Iran remains the world’s foremost state sponsor of terrorism, but has been rewarded for what could be temporary and easily reversible restrictions on its nuclear program.

Rather than moderate its foreign policy, Tehran has unleashed a series of provocations and threats since reaching the nuclear deal.

It has escalated its military intervention in Syria, flouted U.N. Security Council resolutions banning Iranian ballistic missile tests, conducted a live-fire naval missile test in close proximity to a U.S. aircraft carrier in the Persian Gulf, seized one more American hostage in addition to the four it had already detained before the July 14, 2015, nuclear agreement, and captured, disarmed, and humiliated 10 American sailors who drifted into Iranian territorial waters.

In case anyone missed the point of displaying a ballistic missile with the phrase “Israel should be wiped off the Earth” written on it in Hebrew, a senior Revolutionary Guard official proclaimed last week that Iran could “raze the Zionist regime in less than eight minutes.”

Clearly, Iran’s Islamist totalitarian regime has not moderated, despite the disingenuous narratives invented by the Obama administration and its echo chamber allies.

See also: The Dangerous Regional Implications of the Iran Nuclear Agreement, Yes, Iran Is Still Hostile to the US, Ben Rhodes Proves the National Security Council Needs to Be Reformed, The Cynical Spinmeister Who Helped Sell Obama’s Iran Nuclear Deal, Implementation Day: Time for Iran to Cash In on Sanctions Relief and Hostages