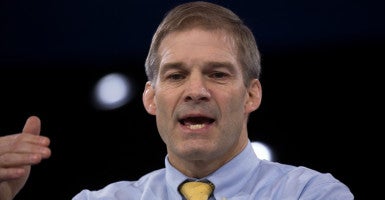 “Welfare programs are meant to be a temporary safety net, but they have become a permanent way of life for millions of Americans,” Rep. Jim Jordan says. (Photo: Jeff Malet Photography/Newscom)

“Welfare programs are meant to be a temporary safety net, but they have become a permanent way of life for millions of Americans,” Jordan, R-Ohio, said in a statement. “Instead of giving impoverished families and individuals a helping hand, the current system penalizes positive steps toward self-sufficiency.”

According to a press release from Jordan’s office, H.R. 5360, the Welfare Reform and Upward Mobility Act, is based on Maine’s successful reforms and the welfare reforms of 1996.

The bill would, among other things, implement stricter work requirements for “able-bodied” adults  without dependents receiving assistance through the Supplemental Nutrition Assistance Program, or SNAP. It would also help recipients with employment training and job searches to give recipients the tools needed to overcome poverty.

“Able-bodied individuals should be required to work—or be prepared to work—as a condition to receiving aid,” Robert Rector, a senior research fellow at The Heritage Foundation, told The Daily Signal.

Jordan, alongside Rep. Mark Meadows, R-N.C., and Sen. Mike Lee, R-Utah, wrote in an op-ed for National Review on Thursday that “the key to understanding America’s social-welfare system today—and why it needs to be reformed—is not its bloated annual budget but its tendency to undermine the two most dependable routes out of poverty: work and marriage.”

“Work and marriage are the greatest protectors against poverty. Unfortunately, the means-tested welfare system undermines both,” Rachel Sheffield, a policy analyst at The Heritage Foundation, told The Daily Signal in an email. “These institutions are weaker today than when the War on Poverty began back in the 1960s.”

According to Sheffield, assistance is significantly lessened or even depleted entirely when recipients get married, even if the spouse meets low-income standards as well. These penalties discourage recipients from progressing toward a better, more self-sufficient life, creating a habitual state of government assistance in the U.S.

“Inserting work requirements for able-bodied adults into welfare and reducing marriage penalties are crucial to reform,” Sheffield said in an email to The Daily Signal.

“Welfare should complement efforts toward self-sufficiency rather than displacing them,” Rector said. “Like welfare reform in 1990s, this bill will substantially reduce both poverty and welfare dependents.”

According to a press release from Jordan’s office, the Welfare Reform and Upward Mobility Act will do the following:

-Focus on able-bodied adults without dependents, by reinforcing an 80-hour per month work activation program to help SNAP recipients rise out of poverty.

H.R. 5360 is currently co-sponsored by Meadows, Reps. Scott DesJarlais, R-Tenn.; Louie Gohmert, R-Texas; and Steve Chabot, R-Ohio. It is sponsored in the Senate by Lee.

“I’m honored to work with Sen. Mike Lee to improve the welfare system and help our fellow Americans realize their goals and potential,” Jordan said in a statement.