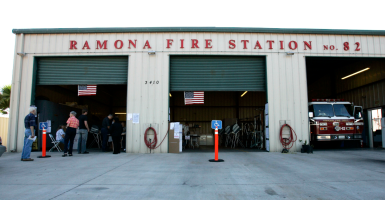 CBS reports that California is the only state that does not comply with the Help America Vote Act of 2002, something the Obama administration has basically ignored. (Photo: John Gastaldo/ZUMA Press/Newscom)

Hollywood has always loved making films about the walking dead, but in Southern California it appears they have a real life problem with “zombie” voters.

An investigation by CBSLA2 and KCAL9 found that hundreds of deceased persons are still on voter registration rolls in the area, and that many of these names have been voting for years in Los Angeles.

For example, John Cenkner died in 2003, according to Social Security Administration records, yet he voted in the 2004, 2005, 2006, 2008, and 2010 elections. His daughter told the station that she was “astounded” and couldn’t “understand how anybody” could get away with this.

Another voter, Julita Abutin, died in 2006 but voted in 2008, 2010, 2012, and 2014. According to CBS, the county confirmed they have “signed vote-by-mail envelopes” from Abutin since she passed away. So either someone has been forging her signature or her ghost has quite an earthly presence.

The investigation revealed that 265 deceased persons voted in Southern California, 215 of them in Los Angeles County. Thirty-two were repeat voters, with eight posthumously-cast ballots each. One woman who died in 1988 has been voting for 26 years, including in the 2014 election.

This report comes 20 years after the contested election of Rep. Loretta Sanchez, D-Calif., from this same area. An investigation by a U.S. House committee found that hundreds of illegal ballots were cast by noncitizens and improper absentee ballots.

In that 1996 election, when she defeated incumbent Bob Dornan, a winning margin of 979 votes was whittled down to only 35 votes or fewer when that voter fraud was factored in. In cases like these, where elections are decided by only a small number of votes, the harmful effects of voter fraud are most obvious.

Yet here, two decades later, California has still not taken the necessary steps to ensure the reliability of its electoral system.

As a result of the investigation, Los Angeles County supervisors called for an investigation into the findings. Even if these particular zombie voters did not change the outcome of an election, each fraudulently cast ballot stole and diluted the vote of a legitimate voter.

Cases like these and many others show that voter fraud is a real phenomenon and a potential threat to the integrity of the election process.

The Los Angeles County Registrar pointed to the 1200 to 2000 voter registrations removed every month to update records and told reporters, “There’s really no way to connect a person whose death is recorded with a person who is registered to vote unless we get some kind of notification from the family.”

But that is plain nonsense. Other states do frequent comparisons between their voter registration lists and the death databases maintained by the Social Security Administration, and other state agencies consult vital records departments in order to remove voters who have died.

The CBS investigation shows both that voter fraud exists and that this type of fraudulent voting is detectable through proper investigation.

CBS reports that California is the only state that does not comply with the Help America Vote Act of 2002, something the Obama administration has basically ignored.

The Help America Vote Act establishes mandatory minimum standards of accuracy for state voter registration lists and requires states to engage in regular maintenance and updates to remove ineligible voters who die or move away.

California is obviously not complying with these requirements.