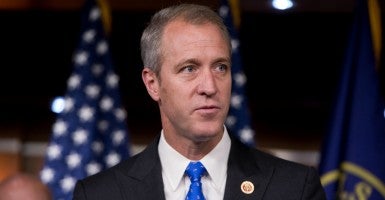 Whereas last week Congress voted to reject this proposal—known as the Maloney amendment—last night they voted to ratify Obama’s 2014 executive order barring federal contractors from what it describes as “discrimination” on the basis of “sexual orientation and gender identity” in their private employment policies.

And, of course, “discrimination” on the basis of “gender identity” can be something as simple as having a bathroom policy based on biological sex, not gender identity, as we learned last week from Obama’s transgender directives. And “discrimination” on the basis of “sexual orientation” can be something as reasonable as an adoption agency preferring married moms and dads for orphans, than other arrangements.

Indeed, in the past few weeks we’ve seen additional examples of what counts as “discrimination” on the basis of “gender identity.”

Congress should not be ratifying Obama’s radical transgender agenda and imposing these outcomes on private employers just because they contract with the government.

All Americans should be free to contract with the government without penalty because of their reasonable beliefs about contentious issues. The federal government should not use government contracting to reshape civil society about controversial issues that have nothing to do with the federal contract at stake.

Obama’s executive order and the Maloney amendment treat conscientious judgments about behavior as if they were invidious acts of discrimination akin to racism or sexism.

By contrast, “race” and “sex” clearly refer to traits, and in the overwhelming majority of cases, these traits (unlike voluntary behaviors) do not affect fitness for any job.

Congress tried to minimize the damage of the Maloney amendment with two provisions last night. One provision, introduced by Rep. Joe Pitts, R-Pa., amended the Maloney amendment to say that it couldn’t violate the U.S. Constitution. Another provision, the Byrne Amendment, attempted to attach existing religious liberty protections to the bill. Neither adequately protects against the damage of Maloney.

Liberal activist judges will do all they can to ensure that sexual orientation and gender identity policies will trump religious liberty protections.

This is why Congress should not be elevating sexual orientation and gender identity as a protected class garnering special legal privileges.

Here is a list of the 42 Republicans who voted for the amendment:

My position on this issue has not and will not change,” Shimkus said in a statement. “I’ve consistently defended religious liberty and I always will. During a series of 14 votes on the House floor, I accidentally cast a ‘yea’ vote for the Maloney Amendment when I intended to vote ‘nay.’ I regret the mistake.