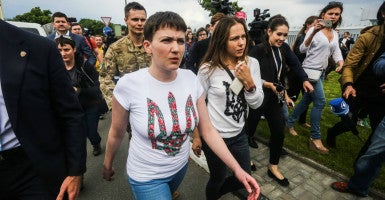 KYIV, Ukraine—As part of a prisoner swap, Russia has released jailed Ukrainian army helicopter pilot and Member of Parliament Nadia Savchenko, who became a national symbol of Ukrainian resistance to Russia since her capture nearly two years ago.

“This is good news for Ukraine,” said Alexander, a 21-year-old student who was out celebrating Savchenko’s release with friends on the Maidan, Kyiv’s central square, on Wednesday evening. “I’m proud of her. She’s a national hero.”

A Russian court sentenced Savchenko, 35, to 22 years in jail for her alleged role in killing two Russian journalists on a battlefield in eastern Ukraine during a 2014 mortar attack. Savchenko denied the charges, and many countries, including the United States, decried her trial and sentence as unjust.

At the time of her capture in June 2014, Savchenko was serving with the Aidar Battalion, a volunteer infantry unit. She was captured in Ukraine by combined Russian-separatist forces. Her trial was in Russia.

“I can’t bring the dead back, but I am ready to lay my life on the battlefield again, and I will do everything to ensure that every person who is in captivity walks free,” Savchenko told reporters after her return to Kyiv’s Boryspil airport Wednesday, according to Interfax-Ukraine, a Ukrainian news agency.

According to TASS, a Russian news site, Russian President Vladimir Putin pardoned Savchenko after meeting with relatives of the slain Russian journalists. They reportedly asked the Russian president to grant Savchenko clemency.

Savchenko’s release comes amid a surge in fighting in eastern Ukraine.

Seven Ukrainian servicemen died in a 24-hour period Tuesday—the highest one-day death toll since August. Artillery strikes at different locations along the front lines contributed to the casualties, highlighting how Tuesday’s deaths were not a one-off event at a single location, but were representative of ongoing combat along the length of the 200-mile-long front lines.

The two-year-old conflict continues a perpetual cycle of escalation and cooling off—keeping the war active enough to be an economic and political drain on Kyiv, while not ever hitting the tipping point necessary to garner widespread international media coverage.

The sometimes-farcical nature of Savchenko’s trial, and the flimsy, illogical evidence often presented against her drew comparisons among Ukrainians to Soviet-era show trials designed for propaganda value.

Russia’s 2014 seizure of Crimea and ongoing military support for Ukraine’s two breakaway separatist territories have ignited anti-Russian sentiment in Ukraine. Many Ukrainians consider Russian aggression since 2014 to be the Kremlin’s contemporary continuance of Soviet oppression.

Scenes of Savchenko singing the Ukrainian national anthem while in a Russian courtroom, and stories of her defiant hunger strikes became a rallying cry for Ukrainians against Russia.

“We will return Crimea and Donbas under Ukrainian sovereignty as we have returned Nadia,” Poroshenko said in a statement Wednesday.

Savchenko’s imprisonment was also a longstanding point of diplomatic contention between Russia and the U.S.

“We call on Russia to make the right choice—to drop all charges and release her at once,” Biden said in a statement. “Nadiya deserves to go home to her family and friends and join her fellow Rada members to begin shaping a new Ukraine.”

“Her trial and continuing imprisonment demonstrate disregard for international standards, as well as for Russia’s commitments under the Minsk agreements,” Kerry said in March.

The Hero Has Landed

Savchenko’s release sparked celebrations in Kyiv, as well as a national media firestorm. Media vans were lined up around the presidential administration building in Kyiv on Wednesday evening. Along Khreshchatyk, Kyiv’s central avenue, revelers were waving Ukrainian flags and singing patriotic songs.

Savchenko was elected to Ukraine’s parliament during her imprisonment in November 2014, and her release could have political repercussions.

Poroshenko’s public approval ratings are at dismal levels, and securing Savchenko’s release is a high-profile win for the Ukrainian president.

On Wednesday, following Savchenko’s return to Ukraine, Poroshenko wrote on Twitter: “The presidential plane with hero of Ukraine Nadia Savchenko has landed!”

Savchenko was active during the 2014 Maidan revolution, and some Ukrainian political watchers think she will be an agent of change in the Verkhovna Rada, Ukraine’s parliament.

Her popularity and defiant attitude could give her a platform to reinvigorate the kind aggressive, top-to-bottom reforms that inspired the 2014 revolution.

Many Ukrainians are frustrated with their post-revolution government. Anti-corruption reforms have been slow going due to the war effort and infighting among Ukraine’s political class—many of whom got their start in the ancien régime.

Also, Poroshenko’s push to resolve the conflict through political concessions with the separatist territories—concessions which are required under the Minsk II cease-fire—have been widely unpopular.

“The Minsk accords are a good thing. It would be very nice if they are implemented,” Savchenko told reporters during a press conference with Poroshenko on Wednesday in Kyiv.

She added: “I am against people wanting war. I want them to desire peace. Unfortunately, peace is achievable only after war—there is a crossroads after which there is no turning back.”