Despite Rising Tensions in Southeast Asia, US Still Projecting Uncertainty 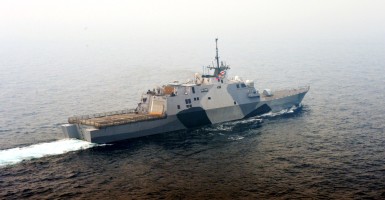 There is a lot going on in Southeast Asia. The United States has conducted another freedom of navigation operation in the area of several disputed islands. The American Aegis destroyer USS William P. Lawrence sailed within 12 nautical miles of the artificial Chinese island built atop Fiery Cross Reef.

Because Fiery Cross Reef began as a “high tide elevation (HTE),” (meaning: a rock) it is entitled to a 12 nautical mile zone of territorial waters.

The United States therefore chose to conduct an “innocent passage,” sailing across the 12 nautical mile zone with its radars off, helicopter grounded, and weapons aimed fore-and-aft. Its main challenge to the Chinese was conducting its passage without giving the People’s Republic of China prior notification.

So, the administration continues to conduct freedom of navigation operations at a desultory pace, with nearly five months intervening since the last operation.

Thus, it conducts “innocent passage” near HTEs (rocks and islands that legitimately project a 12 nm territorial water zone), rather than freedom of navigation activities near places like Subi Reef and Mischief Reef (where China has also built airstrips), which, as low-tide elevations (LTEs), cannot legally claim any territorial waters.

This freedom of navigation operation occurs in the shadow of recent elections in the Philippines. The winner, Rodrigo Duterte, has talked about approaching the PRC for its own deal.

Like President Obama when he first took office in 2009, Duterte wants to offer China an “open hand.” He has indicated he is willing to engage in direct bilateral talks with the Chinese government on resolving their mutual claims to the South China Sea.

What steps he might take in this regard remain uncertain, especially as the Permanent Court of Arbitration at the Hague is expected to issue a finding in the next few months. It also raises questions about how far the newly revived US-Philippines military cooperation efforts will now extend.

Malaysian press, meanwhile, reported that Kuala Lumpur has agreed to focus on the “Declaration on the Conduct of Parties in the South China Sea” and the completion of a South China Sea Code of Conduct as the means of resolving its dispute with Beijing.

That these measures have yet to bear fruit or resolve the ongoing tensions despite years of discussions suggests that Malaysia is more interested in reaching its own accommodation with Beijing than an actual expectation of a different result.

The Malaysian approach may have been encouraged by China’s reaction to the American freedom of navigation operations.

In response to the American destroyer’s passage, the Chinese deployed a destroyer and two frigates.

In addition, two Chinese fighters and a Chinese airborne early warning aircraft were also soon on the scene. Given that China constantly insists that it has not militarized the South China Sea, such a display of force suggests that when China has completed its military preparations of the islands—most other states will be clearly outmatched.

Obama, meanwhile, has had little to say about developments in the region.

One can only hope that he will clarify what American policy is, in the face of Chinese assertiveness and growing regional tension.