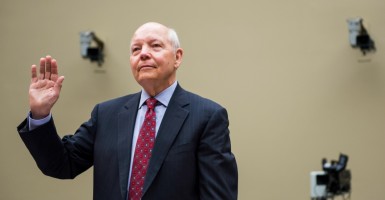 House Republicans will soon take the next steps necessary in their bid to impeach IRS Commissioner John Koskinen.

On Tuesday, the House Judiciary Committee plans to hear testimony and examine charges that Koskinen obstructed a congressional investigation into the agency’s treatment of conservative groups.

While Koskinen is willing to appear at a second hearing in June, the Internal Revenue Service told Politico that the 76-year old commissioner was not able to prepare adequately for the Tuesday hearing. So the nation’s top taxman won’t show.

In a written statement to the Judiciary Committee, Koskinen described the allegations and impeachment resolution as “without merit” and “unwarranted.”

“Under my direction,” Koskinen wrote, “the IRS has responded comprehensively and in good faith to the various subpoenas and document requests from the investigating entities.”

Nevertheless, Rep. Jim Jordan, R-Ohio, told The Daily Signal “that the second hearing is more important.”  The Freedom Caucus Chairman, who helped spearhead the impeachment effort, explained that the first hearing “is just sort of to get the facts out there.”

Republicans, like Jordan, say there’s plenty to cover at Tuesday’s hearing without Koskinen.

Conservatives argue that Koskinen is unfit to be tax chief because he flouted congressional authority, allowed subpoenaed emails to be destroyed, and misled the public during his testimony.

“Never lose site of the underlying offense though,” Jordan said, “an agency, with the power the IRS has over American lives, systematically targeted people for their political beliefs. That is as fundamentally wrong you can be.”

Rep. Ron DeSantis, R-Fla., described the agency’s subsequent conduct as “a total obstruction of justice,” in an April interview with The Daily Signal. “And the question is, will Congress do anything when an agency like that walks all over us? Or are we just going to let is happen?”

The Florida prosecutor, who sits on the Oversight and Government Reform Committee, is slated to testify Tuesday and he’s had plenty of time to prepare: the effort began last October in that committee under chairman Jason Chaffetz, R-Utah.

Since then, the GOP brass have been hesitant to continue the impeachment process. House Speaker Paul Ryan, R-Wis., said that the IRS “needs to be cleaned up” but said that’s a task best suited for after the November election.

To place pressure on leadership, members of the Freedom Caucus went to the floor on April 14 to deliver speeches calling on Ryan and Judiciary Committee Chairman Bob Goodlatte, R-Va., to end their opposition to proceeding with impeachment.

Later, behind closed doors, conservatives threatened to go it alone. The Freedom Caucus threatened to use a mechanism known as a “privileged resolution” to force a floor vote on impeachment if leadership declined.

Jordan said he believes that Koskinen’s record combined with “members of the Freedom Caucus pushing our leadership to do it, that’s what finally caused us actually to get a hearing.”

After going through the Judiciary Committee, the impeachment effort would still require a majority of the House before going to the Senate for further consideration.

But Jordan wouldn’t comment on what the Freedom Caucus might do if the impeachment effort again got bogged down in committee. The Ohio chairman would only say that “we’re committed to impeaching Mr. Koskinen.”

Historically, this would be a rare move: Congress has only deployed its impeachment power 19 times since the nation’s founding. Koskinen would be just the 20th federal official to be put on congressional trial, and could become only the ninth convicted.