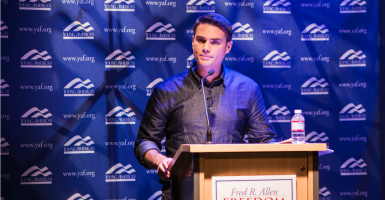 A lawsuit filed Thursday against numerous staff at California State University-Los Angeles claims that the university discriminated against free speech by trying to silence Ben Shapiro, 32, a prominent conservative voice who has spoken on college campuses around the country.

“Free speech on college campuses, particularly publicly-sponsored campuses, it’s not merely a necessity, it’s a right,” Shapiro, editor-in-chief of the Daily Wire, said at a press conference Thursday in Los Angeles. “That right is being quashed all across the country by administrators who are significantly more intent on indoctrinating students and eliminating dissent than giving students the opportunity to hear different ideas and reach their own conclusions about those ideas. It’s time for that to stop.”

“Public universities today don’t allow the full range of viewpoints to be expressed on campus,” Tyson Langhofer, senior counsel with the Alliance Defending Freedom, told The Daily Signal. “There are dozens and dozens of events and speakers and seminars that are put on on campuses from a liberal viewpoint. When the rare time comes up that students try to bring in a conservative speaker or a different viewpoint, those viewpoints are typically suppressed.”

“Students should be able to participate in the marketplace of ideas on campus without fear that the administration is going to suppress their ideas simply because they disagree with their viewpoint,” Langhofer told The Daily Signal.

On February 25, Young America’s Foundation hosted an event called “When Diversity Becomes a Problem,” featuring a talk with Shapiro. According to Alliance Defending Freedom, the university wanted to charge YAF over $600 to provide security due to the “controversial” nature of the topic.

A few days prior to the event, University President William A. Covino emailed Young America’s Foundation members, informing them that the event was canceled, wishing to schedule a “more inclusive event” with Shapiro. When YAF and Shapiro refused to reschedule, Covino changed his mind.

Demonstrators and protesters tried to block the event at California State University-Los Angeles from happening, even linking arms to block entrances so that students could not get into the presentation and pulling a fire alarm midway through Shapiro’s speech, The Daily Signal previously reported.

“The university police officers did not take any action to stop the [protesters] from blocking access to the Free Speech Event or to otherwise assist interested individuals in gaining access to the event,” the lawsuit says.

Shapiro, who had to be escorted out by police after the event because of safety concerns, told The Daily Signal that he’s “never experienced anything quite like” what happened.

“The main problem at CSU-LA is that the administrators were not only not helpful, they were actively working to prevent the event from taking place and then taking their power to basically quash any attempt to clear a pathway. This is a unique situation,” Shapiro said. He added: “The administration was responsible for this getting bad. They should have allocated more police officers. Cal State- LA was a disaster from start to finish.”

Named in the lawsuit are Covino and Nancy Wada-McKee, vice president for student life, among other professors and faculty alleged to have helped encouraged and helped in the protest.

California State University-Los Angeles did not respond to The Daily Signal’s request for comment.

The safety of the students and other attendees would not have been threatened if the university police officers had moved the [protesters] away from the front and rear entrances to the theater, but Defendants Covino and Wada-McKee had ordered them not to do so.

The university police then escorted Shapiro through a secret exit while all of the attendees were forced to remain in the theater.

Shapiro cited the “failure of the administration to protect the safety of students who wish to exercise First Amendment rights,” as a concern for college students and parents regarding situations like what happened at California State University- Los Angeles.

Shapiro says that he has also encountered protesters at other college campuses he has spoken at. “When I spoke at the University of North Carolina there was a walkout in the middle,” he said. When he spoke at Penn State, “it was pretty crazy.”

At many other colleges he has spoken at, everything has gone “totally fine.”

“The thing that I think was the most concerning about this situation is the level of involvement that the faculty had in organizing this protest and actually taking part in the protest and blocking the doors so that students weren’t able to go in and hear Ben’s speech and hear a viewpoint that they don’t typically hear on a campus,” Alliance Defending Freedom’s Langhofer said.

Three months after the event, some students organized a “healing” space to recover from Shapiro’s speech, according to Young Americans for Freedom Program Officer Amy Lutz. “First, most, if not all of these students, didn’t even attend the lecture,” Lutz wrote.

Shapiro said Thursday at the press conference announcing the lawsuit: