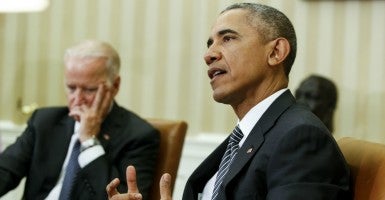 There are already more than 2,000 proposed or final rules in the pipeline—including 144 that are expected to cost $100 million a year or more. (Photo: Aude Guerrucci/UPI/Newscom)

The tide of red tape that threatens to drown U.S. consumers and businesses surged yet again in 2015, according to a Heritage Foundation study we released on Monday.

More than $22 billion per year in new regulatory costs were imposed on Americans last year, pushing the total burden for the Obama years to exceed $100 billion annually.

That’s a dollar for every star in the galaxy, or one for every second in 32 years.

The consequences of this rampant rulemaking are widespread:

The rule represents the first direct regulation of so-called greenhouse gas emissions from power plants, at a cost of $7.2 billion a year (and far more according to critics). Despite the huge costs, the plan will do nothing to mitigate global warming.

America’s problem with excessive regulation did not start with the Obama administration, of course.

His predecessor George W. Bush was hardly a paragon of deregulation. Although Bush showed restraint during his first term, the number of regulations soared during his final years in office. Under the two administrations combined, their new rules added $176 billion in annual regulatory costs on Americans.

And there is much more to come. Obama’s final year in the White House could be his busiest. Historically, rulemaking increases as presidents scramble to fulfill their regulatory agenda before leaving office.

There are already more than 2,000 proposed or final rules in the pipeline—including 144 that are expected to cost $100 million a year or more. These include yet more energy-efficiency mandates for home and commercial appliances, additional food-labeling requirements, stricter fuel economy standards for vehicles, and more stringent limits on consumer access to credit.

In a post-Obama era, the need for reform of the regulatory regime will be greater than ever before. Immediate reforms should include requiring legislation to undergo an impact analysis before a floor vote in Congress, as well as requiring that every major regulation obtain congressional approval before taking effect.

Sunset deadlines should also be imposed for all major rules, and independent agencies should be subject to the same White House regulatory review as executive branch agencies.

The unparalleled increase in regulatory burdens spells a decline in economic freedom and individual liberty, with a concomitant increase in political gamesmanship and cronyism—all of which inhibits innovation, investment and job creation, increases prices, and curtails consumer choice.

Congress needs to take immediate action to control the continued expansion of the administrative state, prevent further harm to the economy, and stem the erosion of individual liberty.