Jim DeMint: Why I Met With Facebook’s Mark Zuckerberg 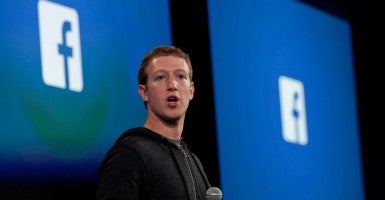 The only hope for saving freedom in America may be the uncontrolled distribution of information to individuals through platforms like Facebook.(Photo: Peter DaSilva/EPA/Newscom)

This election season has made many Americans even more cynical about our democratic system of government. There is clearly political upheaval underway in America and around the world. This massive disturbance of the status quo has been fueled in large part by more people getting better, faster information from many sources on the internet.

Previously, news on political debates was controlled by a few powerful newspapers or broadcast television. The New York Times, which used to set the daily agenda for national media coverage, had the motto “all the news that’s fit to print.”

But who decided what was “fit” for the public to know?

Powerful politicians could build alliances with a few editors and together control what information was available to the public and what was kept unseen, deemed “unfit” for them. The internet, with its hundreds of media outlets, blogs, and social platforms, has completely changed the way news is shared and consumed, pulling back the curtain on secrets Washington had long protected.

All around the world dictators and communist government officials are conspiring to censure or block the free flow of information and ideas now available on the internet to their citizens. There is nothing more threatening to tyrants than citizens who can’t be duped by government propaganda or bias media.  The internet has decentralized the control of information and has created a new, and perhaps last, frontier of freedom for all of mankind.

Facebook’s Role in the Exchange of Ideas

One of the largest and most powerful players in this new frontier of freedom is Facebook. Over a billion people actively use Facebook to connect with people, businesses, and news outlets all around the world.  Facebook claims to provide an unbiased and unfiltered platform for the free exchange of ideas, information, news, and personal stories.

Recently, former Facebook employees claimed that the company regularly censored and blocked information with a conservative point of view.  This seemed to confirm the experiences of individuals and organizations that feel they have faced some degree of bias from Facebook over the past several years.

If Facebook promises its users an unbiased platform for the free exchange of all ideas, then it should keep that promise.

The revelation of bias against conservatives is disturbing and difficult to understand. The ideas, values, and principles that conservatives advance are the same that made Facebook one of the most successful companies in the world: freedom of speech, entrepreneurship, free markets, individual choice, freedom of association, protection of property and intellectual rights and limited interference by government. We on the right often wonder why anyone at Facebook or other successful companies would support leftist political interests that want to destroy these free market principles.

The Internet Can’t Go the Way of Hollywood

Freedom is now under attack in America by big government, big corporations, big government unions, and big liberal media. The only hope for saving freedom in America may be the uncontrolled distribution of information to individuals through platforms like Facebook.  If the internet goes the way of liberal broadcast and cable media, schools and universities, and Hollywood, our democracy will be replaced by speech codes, cries of “hate speech!” for speaking against the prevailing liberal wisdom, and lack of real public debate.

Mark Zuckerberg, the CEO of Facebook, invited me and several other conservative leaders to his headquarters in San Francisco to discuss the reported bias against conservatives.  The last thing I wanted to do was fly across the country for a one-hour meeting, but the issue was too important for me to sit on the sidelines. The Heritage Foundation serves, builds, and leads the conservative movement in America and part of our role is to do everything we can to improve the flow of accurate and honest information to voters.

Zuckerberg brought his senior staff to the meeting on Tuesday and we had a serious and open discussion about the growing lack of trust with Facebook among conservatives.

I made it clear that Facebook has every right to be as biased as it wants to be as a private company, and conservatives have every right to look elsewhere for social platforms if they feel Facebook is silencing them. But if Facebook promises its users an unbiased platform for the free exchange of ideas – all ideas – then it should keep that promise.

Zuckerberg was firm in his commitment that Facebook would be an unbiased platform that encourages the sharing of all points of view, but he readily admitted that they had not yet perfectly achieved that goal.  It will take a lot of work and continual dialogue to keep the platform fair and open. But he convinced me that it was his genuine intent to root out any bias against conservatives or against any other point of view.

Facebook should recognize the value of conservative media outlets as news organizations.

He asked for our recommendations to rebuild trust with conservatives. There were numerous suggestions, and I offered a few.

I encouraged him to join conservatives speaking out in favor of free speech and call out those on the left who seek to shut down debate on important issues in the name of political correctness. We need allies in the fight for free speech and religious liberty on college campuses and the workplace. I asked that they provide more transparency into how their platform operates and makes news decisions, and to work regularly with conservatives to increase understanding and answer questions that arise.

They should recognize the value of conservative media outlets as news organizations. According to Facebook’s May 12 explanation of Trending Topics, numerous conservative news outlets like The Washington Free Beacon, Conservative Review, The Daily Signal, Hot Air, Newsmax, PJ Media, Reason, The Federalist, The Resurgent, and Townhall are not among the websites listed on their external RSS website crawler or on the list of the more than 1,000 media outlets Facebook uses to corroborate reporting.

And while I’ve noticed the idea has created some controversy, I do believe Facebook should consider hiring more conservatives for leadership positions. This is not a government mandate, or a ploy to blackmail them into diversity. However, Mr. Zuckerberg asked for concrete ways to ensure Facebook equally serve conservatives, and this is certainly one way to achieve it. Outlets like CNN, The New York Times, and The Washington Post have similarly attempted to alleviate concerns of bias by hiring commentators and reporters with conservative backgrounds over the years.

No one is expecting—or asking—Facebook to become a conservative organization. However, if Mark Zuckerberg is serious and committed to building an open, transparent and unbiased Internet platform that facilitates the worldwide sharing of relationships, information, and ideas, it will be a boon to conservatives and help encourage healthier political debates around the world.  Let’s hope that this frontier of freedom survives and thrives.