House Rejects Amendment That Would Have Curtailed Religious Freedom 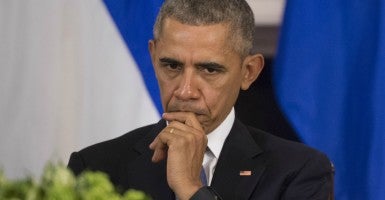 The Maloney Amendment would have ratified President Obama’s executive order barring federal contractors from what it describes as “discrimination” on the basis of sexual orientation and gender identity in their private employment policies. (Photo: Kevin Dietsch/CNP/AdMedia/SIPA/Newscom)

On Thursday, the House of Representatives voted to reject the Maloney Amendment. The Maloney Amendment would have ratified President Barack Obama’s executive order barring federal contractors from what it describes as “discrimination” on the basis of sexual orientation and gender identity in their private employment policies.

And, of course, “discrimination” on the basis of gender identity can be something as simple as having a bathroom policy based on biological sex, not gender identity, as we learned last week from Obama’s transgender directives. And “discrimination” on the basis of sexual orientation can be something as reasonable as an adoption agency preferring married moms and dads for orphans than other arrangements.

Employers should respect the intrinsic dignity of all of their employees, but as I explained in greater detail at The Daily Signal two years ago, Obama’s executive order undermines our nation’s commitment to pluralism and religious liberty. So a vote for the Maloney Amendment is a vote to support Obama’s radical agenda.

Obama’s executive order, like the Maloney Amendment, does not contain any religious liberty protections—though it does leave in place an older federal regulation that permits religious organizations that favor employment of co-religionists to continue such practices. But there is no protection for organizations that hire based on mission—not on affiliation—to continue to do so. This in effect excludes taxpayers who hold conscientious beliefs about sexuality that run counter to Obama’s from being eligible for federal contracts funded with their own tax dollars.

The Obama executive order, and attempts to codify it through the Maloney Amendment, are problematic for four reasons, but there is at least one thing that can be done in response.

In response to this executive order, Congress has an opportunity to protect religious liberty and the rights of conscience. Policy should prohibit the government from discriminating against any individual or group, whether nonprofit or for-profit, based on their beliefs that marriage is the union of a man and woman or that sexual relations are reserved for marriage. The government should be prohibited from discriminating against such groups or individuals in tax policy, employment, licensing, accreditation, or contracting. This is the policy approach proposed in both the Russell Amendment and the First Amendment Defense Act.

Protecting religious liberty and the rights of conscience fosters a more diverse civil sphere. Indeed, tolerance is essential to promoting peaceful coexistence even amid disagreement.