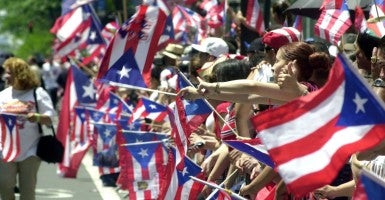 PROMESA creates an incentive for President Obama to drag his feet and allow his allies to govern Puerto Rico free of legal challenges and oversight. (Photo: Richard B. Levine/Newscom)

A House committee released the third draft of a bill aimed at helping Puerto Rico address its debt crisis. The Puerto Rico Oversight, Management and Economic Security Act (PROMESA) has drawn praise from Minority Leader Nancy Pelosi, D-Calif., quite an achievement for a Republican speaker. However, bipartisanship does not guarantee good policy.

The House Committee on Natural Resources bill still contains a troubling provision that would suspend a civil right of bondholders, vendors, and others who do business with the Commonwealth of Puerto Rico by immediately freezing all financial litigation against the territory. Enacting such a “stay” of litigation without supervision by the Oversight Board created in PROMESA would give Puerto Rico’s unpopular government an opportunity to shuffle money around, potentially without consequences, for months.

This is not idle speculation: only President Barack Obama can nominate members of the Oversight Board, and Politico reported this week that negotiations stuck temporarily on what happens if the nominations are not submitted as late as Jan. 2017.

Puerto Rico and its U.S. Treasury Department advisers have not been faithful partners in addressing the debt crisis. One Puerto Rican official told El Vocero last week that it was the White House’s strategy to create the appearance of a humanitarian crisis in Puerto Rico to induce action in Congress. Puerto Rico has also pushed the limits of the law to raise revenue, and recently lost a court case over extra taxes it had imposed on Wal-Mart.

As drafted, the bill creates an incentive for Obama to drag his feet and allow his allies to govern the island free of legal challenges and oversight. If the stay of litigation is as important as its proponents claim, then delaying it until the Oversight Board is appointed will give the president a good reason to move quickly to install the Board and begin the reform and restructuring process laid out in PROMESA.

The newest version of the draft has improved language intended to protect the prioritization of bondholders’ rights to payment. This is a positive step, but it relies on the Oversight Board and bankruptcy judge’s interpretations to take force. Most importantly, the prioritization language aims to ensure that government pensioners are not exempted from benefit reductions while bondholders – including many retirees and pension funds in Puerto Rico and the mainland U.S. – suffer significant losses. With upwards of $44 billion in unfunded pension obligations, subjecting pensioners to cuts along with other unsecured creditors is essential.

What typically happens in Chapter 9 municipal bankruptcy proceedings is that pensioners emerge relatively unscathed, while bondholders suffer substantial losses. With Puerto Rico’s pensions including Christmas, summer, and medication bonuses, as well as subsidized loans for “cultural vacations,” there is room for ample cutbacks without pushing pensioners into penury.

Ensuring that certain creditors don’t get to skip ahead in line and that others aren’t unfairly pushed to the back is an important principle for any restructuring process. However, prioritization alone only protects the relative position of creditors; it does not protect the relative value of their claims.

The third draft of PROMESA includes some additional provisions aimed at addressing the island’s economic woes. Addressing Puerto Rico’s economic crisis is as important as, and a critical component of, its fiscal crisis. The third draft provides the oversight board with some helpful authority such as selling government assets, implementing changes to reduce the size of government, and preventing policies and laws that hinder economic growth. Additionally, the draft establishes a bi-partisan, bicameral Congressional Task Force to recommend changes that would help spur long-term economic growth in Puerto Rico.

Given that the Congressional members involved in drafting PROMESA were unwilling to take on the crony capitalists who profit from the maritime Jones Act or liberate Puerto Rico from a disproportionate minimum wage, there’s little reason to believe a select congressional group will propose substantial reforms, and even less reason to believe their proposals will be voted on or enacted. A better proposal would be an economic task force within the oversight board, made up of economists instead of politicians, and with a guaranteed and expedited vote on its recommendations. Without addressing the root of the problem, observers should not be surprised if Puerto Rico’s economic crisis continues to worsen even if its debt crisis is resolved.