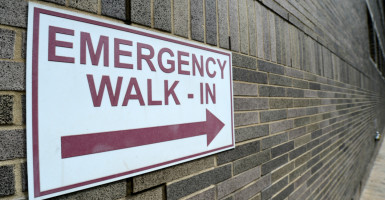 As competition among insurers selling coverage on Obamacare's exchanges declines in areas of the country, some consumers could be faced with higher premiums. (Photo: Anthony Behar/Sipa USA/Newscom)

As insurance companies begin submitting their rates for health care coverage next year, consumers are seeing changes in the number of insurers selling plans on Obamacare’s exchanges.

And in some places, fewer choices on the exchanges can mean higher premiums.

So far, three states—Alabama, Alaska, and Wyoming—have just one insurer selling coverage on their Obamacare exchanges. And in Kansas, Insurance Commissioner Ken Selzer has been talking with carriers to convince them to sell coverage in his state. If Selzer isn’t successful in bringing other insurers on to the exchange in his state, Blue Cross and Blue Shield of Kansas will be the only option for consumers there.

Since Obamacare took effect in 2013, a number of studies have documented a decline in the number of insurers selling coverage on the exchanges.

Just 10 states, meanwhile, have more insurers on the exchanges.

Additionally, a study conducted by the Kaiser Family Foundation found that more than 650 counties nationwide will have one insurance company on the exchanges next year. In states using the federal exchange, HealthCare.gov, 40 percent of counties will see just one or two insurers.

Insurer companies are in the midst of deciding whether to continue offering coverage on Obamacare’s exchanges, and some big players like Humana and UnitedHealthcare have already announced decisions to pull out of some exchanges.

These changes now have health policy experts warning that such a decline in insurer participation on Obamacare’s exchanges could impact how much consumers pay and how much providers charge.

“The focus has been on rural areas where you already have less insurer competition and are getting down to one or two [carriers],” Ed Haislmaier, a senior fellow in health policy at The Heritage Foundation, told The Daily Signal. “I think the effect, paradoxically, is somewhat less. The real issue isn’t the number of insurers. It’s the number of providers.”

In rural areas where there may be only one provider such as a hospital and two or three insurers, the provider could charge what it wants, causing insurers to post similar rates, he said.

“The competition issue in rural areas is more driven by provider monopolies than it is by insurers,” Haislmaier said.

Caroline Pearson, senior vice president of policy at Avalere Health, agreed that in rural areas, specifically, higher premiums from insurers can be tied to increased rates from providers.

“The two are sort of linked,” she told The Daily Signal. “The way that insurers have brought premiums down in some markets is by designing narrower networks where they’re including only a subset of providers with better negotiated rates.”

“In rural areas, there’s a dearth of providers,” she continued. “Plans are beholden to the physicians there, and they don’t have the leverage to drive rates down. I think the monopoly of providers is limiting plans’ ability to keep premiums low.”

Pearson said that though competition has “been effective” at lowering the cost of premiums, consumers can expect to see across-the-board rate increases for a variety of reasons and not just in areas where there is little to no choice of insurer on the exchange.

“People in the exchanges are sicker than insurers were expecting them to be, so it’s costing more to cover them,” she said. “Additionally, the fact that two of the risk mitigation programs [risk corridor and reinsurance] go away in 2017 will also increase rates. Those are the two primary drivers.”

In a study from the American Journal of Health Economics released last year, Massachusetts Institute of Technology economist Jonathan Gruber and the study’s authors warned that a decline in competition among insurers leads to an increase in premium prices.

Using UnitedHealthcare’s decision not to sell insurance on Obamacare’s exchanges in 2014 as an indicator of how premium prices changed, the study’s authors found that had UnitedHealth decided to enter all markets, the cost for the second-lowest silver premium would’ve decreased by 5.4 percent.

The government calculates subsidies based on the cost of the second-lowest silver plan.

Additionally, had insurers sold coverage in all areas on the state’s exchange, the cost of premiums would’ve declined by 11.1 percent.

Gruber and the study’s authors further found that areas where Obamacare’s co-ops, or consumer operated and oriented plans, sold coverage had lower premiums than those that did not.

The co-ops launched in 26 states with $2.4 billion in startup and solvency loans from the Centers for Medicare and Medicaid Services and were intended to boost competition and choice in areas where few existed.

In a speech before a joint session of Congress in September 2009, President Barack Obama warned about how decreased competition among insurers can impact consumers.

“My guiding principle is, and always has been, that consumers do better when there is choice and competition. That’s how the market works,” Obama told lawmakers. “Unfortunately, in 34 states, 75 percent of the insurance market is controlled by five or fewer companies. In Alabama, almost 90 percent is controlled by just one company. And without competition, the price of insurance goes up and quality goes down.”

While consumes in Alabama, Alaska and Wyoming will have just one insurer to select coverage from during next year’s open enrollment period, states have yet to encounter a situation where no insurer will sell on the exchange.

In 2013, before Obamacare’s launch, 34 counties in Mississippi were almost left with no carrier selling on its exchange, according to Vox. However, Humana decided to offer coverage to consumers in those 34 counties—albeit at a price, as premiums in the state were among the highest in the country.

“With only one plan, [insurers] certainly have pricing flexibility to make it work for them financially,” John McDonough, a professor of public health at Harvard University told Vox.

Having no insurers selling on an exchange doesn’t mean a consumer will go without coverage, Haislmaier said. Instead, carriers can and do sell plans off of the exchange.

In Mississippi and South Dakota, for example, Blue Cross and Blue Shield carriers are the largest insurers in those states. Neither, though, sell coverage on the exchanges.

“The key thing here is whether there’s an insurer willing to sell on the exchange,” Haislmaier said. “That’s important because that doesn’t necessarily mean there may not be coverage available off the exchange. But those with subsidies will be affected because they then have to pay full price.”