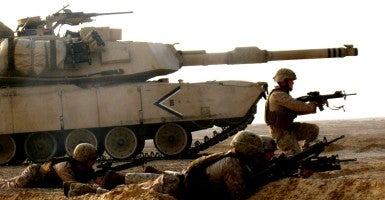 The Obama administration is aggressively defending costly renewable energy initiatives for the Department of Defense.

These requirements mandate that the Department of Defense produce or procure “not less than 25 percent” of its facility energy from renewable energy sources by fiscal year 2025.

The problem with this is that diversification of energy sources by itself does not ensure energy security. In fact, it can actually harm security if the diversification effort creates new vulnerabilities.

As a result of these mandates, the Department of Defense has invested large amounts of money in renewable energy sources that threaten access to stable and reliable electricity, and increase energy spending.

Without this information, it is impossible to provide a frame of reference on which to assess the costs and contributions of renewable energy generation.

Most of the Department of Defense’s installation energy initiatives have also failed to address the stated priority of energy security, that is to make energy sources on which military installations depend more secure, not less so.

Furthermore, wind and solar create power fluctuations that can damage equipment connected to the system and create safety and reliability concerns within the larger network infrastructure.

Unless the Department of Defense can clearly show that renewable energy sources provide a financial or operational advantage, continued investment in such on military installations will waste defense dollars and resources.