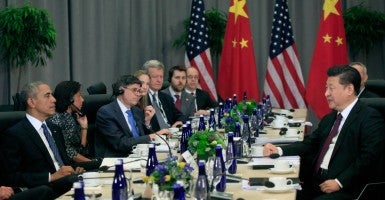 Chinese activities in cyberspace regularly garner a great deal of attention. Chinese hackers have been accused of stealing millions of records from U.S. government databases, such as the Office of Personnel Management, as well as various corporations.

Chinese leadership sees information as inextricably linked to not only the broader national interest, but also to regime survival.

But too often, the focus is on the individual attack, rather than understanding the larger context. This leaves us playing whack-a-mole when trying to deal with Chinese cyber espionage efforts.

In fact, Chinese leadership sees information as inextricably linked to not only the broader national interest, but also to regime survival.

The People’s Republic of China is interested in improving its “comprehensive national power,” the combination of economic, military, political, social, and cultural factors that together reflect national capabilities. In the information age, information is the vital resource that enables all types of power.

At the same time, however, the free flow of information constitutes a dire potential threat to Chinese Communist Party rule. China has emplaced the “Great Firewall of China” and deployed an army of censors numbering in the tens, or even hundreds of thousands, to limit the informational threat to the regime.

But this is insufficient to allay Beijing’s concerns. Ideally, China must control and influence all information flowing to China, which means shaping and molding the international structures that manage that information flow.

China is interested in setting the global norms for cyberspace, but in ways that fundamentally challenge and contradict the free flow of information that the United States has long championed.

So, Chinese cyber actions should be seen as part of a broader effort to secure the means for China to sustain its growth in power (made more urgent by the slowing of the Chinese economy), while also defending the People’s Republic of China, and especially, the Chinese Communist Party’s rule.

The recently announced Chinese military reforms highlight the importance that Chinese leadership now accords information. Among the reforms is the creation of a new service, the PLA Strategic Support Force.

As a careful student of America’s wars, from Operation Desert Shield/Desert Storm against Iraq to Operation Inherent Resolve against the Islamic State, China knows how much the American military depends on easy access to information to fight its wars.

Given the importance accorded information in China’s own conceptions of future wars (termed “local wars under informationized conditions”), the PLA Strategic Support Force is sure to have a central role in any future conflict, targeting an adversary’s space systems, electronic systems, and computer networks and information systems.