We Don’t Need a National Zoning Board 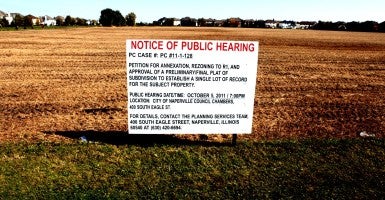 Americans are indeed suffering from high housing prices. But the answer is not a top-down national zoning board in Washington. (Photo: Chuck Berman/Chicago Tribune/MCT/Newscom)

The Obama economy has been tough on America’s working families. Just last week Pew Research Center reported that in the last 15 years “the middle class lost ground in nearly nine-in-ten U.S. metropolitan areas.” One cause of this 15-year squeeze of hardworking Americans? Rising housing prices.

Regulatory fees on home builders have increased a whopping 30 percent since 2011.

While household income has largely been flat during the Obama recovery—the weakest economic recovery since the Great Depression—housing prices have continued to sky rocket, in large part because government regulations artificially inflate the cost of building new units.

In fact, regulatory fees on home builders have increased a whopping 30 percent since 2011, as reported in The Wall Street Journal.

And yet the Obama administration wants to make this problem even worse by implementing its “Affirmatively Furthering Fair Housing” rule, which was issued by the Department of Housing and Urban Development last year. According to department officials, this rule is needed because “increasing a neighborhood’s appeal to families with different income and ethnic profiles can encourage a more diversified population and reduce isolation.”

In other words, this new regulation is designed to give unelected, anonymous bureaucrats in Washington the power to pick and choose who your new next-door neighbor will be. If they don’t believe your neighborhood is “diverse” enough, they will seize control of local zoning decisions—choosing what should be built, where, and who should pay for it—in order to make your neighborhood look more like they want it to.

The Department of Housing and Urban Development has this power because far too many communities have become accustomed to relying on the Community Development Block Grant program, which gives federal dollars to local communities for projects designed to reduce poverty and housing segregation.

But a recent study by the Reason Foundation demonstrated that while the Community Development Block Grant program has been a boon for special interests and channeling taxpayer dollars to politically connected groups, it has been entirely unsuccessful in actually reducing poverty or housing segregation.

Instead of helping all American families by lowering housing costs, the Affirmatively Furthering Fair Housing rule would only add yet another layer of bureaucratic red tape on developers, making it less likely—not more—that they will find it worthwhile to build more housing units.

Americans are indeed suffering from high housing prices. But the answer is not a top-down national zoning board in Washington.