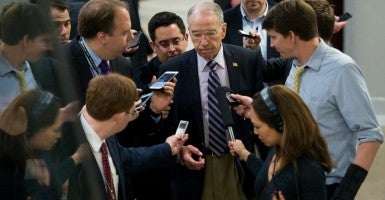 The Senate confirmed Paula Xinis for a federal judgeship in Maryland by a vote of 53-34, over the protests of major state police unions and outside conservative groups.

Xinis, a partner and senior trial attorney at the Baltimore law firm representing the family of Freddie Gray, will serve in what is in effect a lifetime position on the U.S. District Court of Maryland. Gray died in police custody and trials are ongoing for the six officers involved in his arrest.

Monday’s vote to confirm President Barack Obama’s nomination of Xinis, 47, was by a relatively tight margin. If three more senators had voted against her, the nomination would have failed. The president of Maryland’s Fraternal Order of Police, Ismael Canales, wrote to Sen. Jeff Sessions, R-Ala., urging him and fellow senators to oppose the nomination on behalf of “over 20,000 active and retired law enforcement professionals.”

“Based on prior and recent experiences,” Canales wrote, “Ms. Xinis has shown a clear bias [against] law enforcement which began in her position as a complaint examiner … and culminated with her involvement in the civil suit surrounding the Freddie Gray case in Baltimore.”

In her capacity as a complaint examiner for the District of Columbia’s Office of Police Complaints, Xinis ruled against the accused officer in all six cases that came before her.

That record was interpreted as “obvious disdain for the law enforcement profession” in a letter written to each member of the Senate by Baltimore’s local Fraternal Order of Police.

Heritage Action for America, the lobbying arm of The Heritage Foundation, opposed Xinis, writing in a statement Monday afternoon that her nomination “is an affront to our hard working law enforcement agencies all over the country.”

Below is the roll call vote for Xinis.