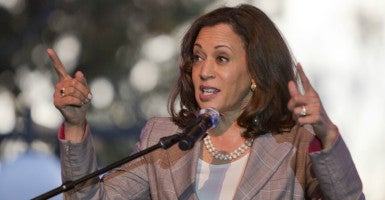 Though a federal judge recently ruled that a conservative nonprofit group doesn’t have to disclose its donor list to California’s Democratic attorney general, conservatives believe this case is just the latest in an ongoing fight related to political activity and free speech.

“This was a great victory for free speech for everyone in this country,” said Mark Holden, the general counsel for Koch Industries, and a board member of Americans for Prosperity, the group asked to disclose its donor list.

“This effort to chill our right to the First Amendment is critical to what the left’s whole agenda is,” Holden told The Daily Signal in an interview. “They talk about getting big money out of politics, but what they really mean is going after speech and activity they disagree with, made by groups they disagree with.”

On April 21, U.S. District Judge Manuel Real found that Americans for Prosperity, which was founded by Charles and David Koch, does not have to submit to Attorney General Kamala Harris the names and addresses of its donors who have spent more than $5,000.

In his ruling, Real wrote, “The attorney general’s requirement that AFP submit its Schedule B [donor list] chills the exercise of its donor’s First Amendment freedoms to speak anonymously and to engage in expressive association.”

But the legal fight is not over, because Harris intends to challenge the decision with the 9th Circuit Court of Appeals.

The case centers around Harris’ aim to enforce a California state law that requires charities, such as Americans for Prosperity, to file a copy of their IRS tax return with the state, including a so-called Schedule B form that includes the names and addresses of donors who donated more than $5,000 during a year.

Since 2001, Americans for Prosperity has filed the tax form without including the donor list, and until 2010, the state had accepted the charity’s registration in California and listed the group as an active charity in compliance with the law.

In a March 2013 letter, however, Harris declared that American for Prosperity’s 2011 filing was incomplete because it did not include the donor list.

The Arlington, Va.-based nonprofit took that challenge to court in December 2014, arguing the California law requiring disclosure of the Schedule B form is unconstitutional.

Harris contends the state law does not infringe on free speech and helps protect the public from fraud and illegal business practices.

“We are disappointed in Judge Real’s ruling and intend to appeal to the 9th Circuit Court of Appeals,” said Kristin Ford, a spokeswoman for Harris, in an emailed statement to The Daily Signal. “The filing of the Schedule B is a long-standing requirement that has helped attorneys general for more than a decade protect taxpayers against fraud.”

In his order, Real said Harris had failed to prove that the state needs donor information to properly investigate charities active in California.

The judge also said the Koch brothers and other donors faced a threat of harm because the state inadvertently disclosed donor lists nearly 1,800 times on a public website that contains charities’ registration forms.

Harris testified that she has implemented procedures to prevent donor information from being disclosed to the public.

While he is satisfied with the judge’s decision, Holden told The Daily Signal he is worried about what he calls one of the unintended consequences of the 2010 Supreme Court case Citizens United v. Federal Election Commission, where the justices ruled that corporations and unions can spend unlimited money on political actions that are done independent of a party or candidate.

Critics contend that Citizens United has increased the influence of money in politics, and that groups like Americans for Prosperity showcase the problem of non-transparent laws governing donor disclosure by nonprofits.

Holden, meanwhile, argues that liberal politicians and Democratic-minded groups are using the legal system to attack their political opponents.

Walker is part of a network of state attorneys general who are investigating whether Exxon misled the public and investors about the harm of climate change.

“The bottom line is, over the last six years we have seen a war on speech,” Holden said. “We are even seeing it on climate change, where we see the use of threats and force by law enforcement to silence groups they don’t agree with. This should not be a partisan issue. It’s just free speech.”