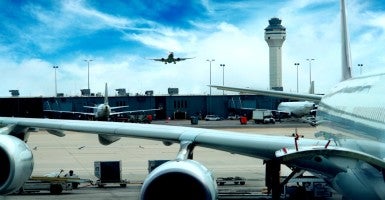 The Aviation Innovation Reform and Reauthorization Act contains several reforms that move in the right direction. Notably, it removes America’s air traffic control system from the Federal Aviation Administration and establishes it as a federally chartered, nonprofit corporation.

But the legislation includes troubling labor provisions. Its supporters seem intent on buying government union support by giving them even more leverage over the public than they now possess.

These private entities have rapidly switched to more reliable modern technologies that reduce the risk of collision. It is promising that members of Congress have acknowledged the benefits of privatizing air traffic control and have proposed to remove it from federal control, as Canada has.

However, the Aviation Innovation Reform and Reauthorization Act (AIRR) does not address one of the problems impeding reform: the National Association of Air Traffic Controllers, the union representing air-traffic controllers. The union has used its leverage to negotiate gold-plated and diamond-studded compensation packages for its members.

The Bureau of Labor Statistics reports the median air traffic controller makes $123,000 a year in cash wages. Including noncash benefits brings the average total compensation package to approximately $200,000 a year—vastly more than most private-sector workers in jobs requiring an associate’s degree.

The public pays for these inflated compensation packages through higher taxes on airline passengers. The National Association of Air Traffic Controllers redistributes wealth from taxpayers and the flying public—most of whom make much less than $200,000 a year – to the union’s members.

The “reform” measure does nothing to stop this. Worse, it includes several provisions that strengthen the union’s hand:

Congress could easily fix these problems. Leaving the current dispute reconciliation system in place—instead of shifting to arbitration—would eliminate most of the labor concerns. The rest would be solved by expressly authorizing the new corporation to fire illegally striking workers—as the federal government can do now.

These changes would enable the new agency to keep labor costs in line. But the Aviation Innovation Reform and Reauthorization Act does not take these steps, and instead increases the union’s leverage. Why?

Probably because AIRR supporters want the National Association of Air Traffic Controllers to support the reforms. They appear to have bought this support by offering the union even more power at the quasi-private agency.

Privatizing the air traffic control system is long overdue. But Congress should not strengthen the union’s power over the flying public in the process.