Yes, Iran Is Still Hostile to the US 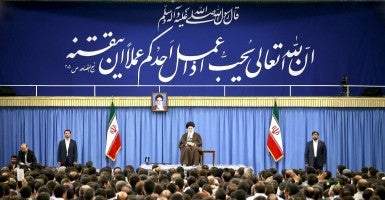 The Obama administration, struggling to salvage what’s left of its self-described “positive legacy,” is unlikely to reverse course with Iran. (Photo: Handout/Reuters/Newscom)

The Obama legacy is already unraveling. Last week, President Barack Obama’s deputy national security adviser, Ben Rhodes, revealed that the nuclear deal with Iran was based on a giant lie he sold to the American public.

Rhodes admitted to concocting a narrative about the U.S.-Iranian negotiations in order to create the impression that the U.S. was dealing with “moderates” in Tehran, not hard-liners who continue to call for “Death to America,” and that the nuclear deal would help to strengthen the “moderates.”

In order to convince media, Congress, and the American public of his creative narrative, Rhodes undertook a painfully simplistic, yet emotionally compelling, messaging campaign. He posed the Iran deal as a choice between war and peace. It was not that simple. Foreign policy seldom is. But this messaging worked: Congress let the deal stand.

But look what we’re left with—an Iran that hasn’t changed despite the “transformative” agreement.

Iran has actually escalated hostile activity since the agreement came into effect. Over the past few months, the Iranian Revolutionary Guard Corps has repeatedly challenged U.S. naval forces in the Persian Gulf.

The Iranian Revolutionary Guard Corps test-fired rockets within 1,500 yards of a U.S. carrier, flew drones over U.S. warships, detained and humiliated American sailors, and launched a series of missiles, including two with the subtle slogan “Israel must be wiped out” written in Hebrew across their fronts—as Vice President Joe Biden happened to be visiting Israel.

The message is clear: Appeasement hasn’t worked, and the Obama administration has somehow missed this point.

The Obama administration, struggling to salvage what’s left of its self-described “positive legacy,” is unlikely to reverse course with Iran.

Instead of pushing back against these provocations, the administration has downplayed these aggressions and repeatedly made concessions in order to satisfy Tehran and maintain its manufactured reality of peace in our day. Inaction and indifference only encourages bad behavior.

The Heritage Foundation’s Jim Phillips noted in his recent paper that the administration’s treatment of Iran runs the risk that:

Iran will interpret U.S. inaction as an invitation to stage further interventions, challenges, and provocations … [repeated U.S. appeasements] also has had a corrosive impact on U.S. credibility that has exacerbated concerns among GCC allies, already alarmed by the administration’s nuclear deal and Middle East flip-flips.

The Obama administration, struggling to salvage what’s left of its self-described “positive legacy,” is unlikely to reverse course with Iran.

It will be left to the next administration to repair the damage inflicted by Obama’s Middle East policies. In the meantime, Congress has an important role to play. In order to safeguard U.S. national interests in the Middle East, Congress should hold Iran accountable on nuclear, terrorism, ballistic missile, and human rights issues through oversight hearings and legislation.