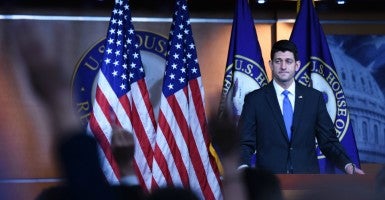 A House resolution adopted on July 30, 2014, authorized the speaker of the House to file the lawsuit. (Photo: Yin Bogu Xinhua News Agency/Newscom)

A federal district court in Washington, D.C., ruled Thursday in favor of the U.S. House of Representatives’ challenge to the Obama administration’s implementation of part of the Patient Protection and Affordable Care Act, also known as Obamacare.

The act has been “revised” dozens of times by the administration since its passage in March 2010, leading the House to sue over the administration’s payment out of the U.S. Treasury of subsidies to insurance providers for providing cost-sharing reductions to certain policyholders, even though Congress explicitly refused to appropriate funds for these subsidies.

As D.C. District Court Judge Rosemary Collyer explained in an opinion last fall, Section 1402 of the law “requires insurers to reduce the cost of insurance to certain, eligible statutory beneficiaries,” and the “federal government then offsets the added costs to insurance companies by reimbursing them with funds from the Treasury.”

This section stated that cost-sharing offsets must be funded by annual appropriations. But the House has never appropriated funds for Section 1402, so it argued that the administration violated Article I, Section 9, Clause 7 of the Constitution, which provides that “No Money shall be drawn from the Treasury, but in Consequence of Appropriations made by Law.”

Funds Not Appropriated by Congress

Collyer ruled last September that the House had standing to challenge the spending of funds not appropriated by Congress, and Thursday she decided the merits of that claim in a significant loss for the Obama administration.

In the opinion, Collyer goes through a detailed explanation of how the House appropriates moneys for the federal government, from permanent or continuing appropriations to current appropriations that must be reauthorized on an annual basis.

While Congress provided a permanent appropriation for Section 1401, which provides tax credits to individual taxpayers to make their insurance more affordable, Collyer concluded that Section 1402 lacked such an appropriation:

Paying out Section 1402 reimbursements without an appropriation thus violates the Constitution” because Congress “authorized reduced cost sharing but did not appropriate monies for it.

Reaction to the Government’s Argument

Collyer calls the administration’s argument that Congress had appropriated the necessary funds “a most curious and convoluted argument whose mother was undoubtedly necessity.”

Furthermore, when the Senate Appropriations Committee adopted the appropriations bill for the Department of Health and Human Services and Obamacare in 2013, its accompanying report specifically said that it was not including the mandatory appropriation requested by the administration for Section 1402.

The administration argued that the permanent appropriation for the individual tax credits contained in Section 1401 also included Section 1402.

In a funny comment on this claim, Collyer said that the administration was trying to “squeeze the elephant of Section 1402 reimbursements into the mousehole of Section 1401(d)(1).” However, she cited a Supreme Court decision in which the court said that Congress does not “hide elephants in mouseholes.”

The administration also claimed that the absence of language appropriating funds “means that Congress felt it unneeded, ostensibly because Section 1402 was already funded permanently.”

But Collyer explained that missing appropriations language in a statute does not allow courts or the administration “license to rewrite the plain text.” In fact, there is substantial case law establishing that an “appropriation must be expressly stated; it cannot be inferred or implied.”

The administration, likewise, relied heavily on the Supreme Court’s wrong-headed ruling, King v. Burwell, imploring the court to consider that “the full context of the [Affordable Care Act] makes the language ambiguous and thus subject to their interpretation.” Unlike in King v. Burwell, which involved treating the federally-run insurance exchange like state exchanges, this case involves “failure to appropriate, not a failure in drafting”:

The relevant question is not whether Congress intended premiums to skyrocket, deficits to explode, or enrollment to plummet—those are not consequences of the statute that Congress wrote in 2010. The relevant question is far narrower: Would it have been ‘nonsensical’ or ‘absurd’ for Congress to authorize a program permanently in 2010 but not appropriate for it permanently at the same time?

The answer, according to Collyer, is clearly no, and there are numerous examples of Congress passing authorizing statutes for various programs and then refusing to appropriate any funds for them.

The administration’s argument that anytime Congress makes a permanent authorization it must be read as a permanent appropriation as well “is assuredly not the law.” And in a sarcastic swipe at the Supreme Court’s decision in King v. Burwell, Collyer says in that case, “the statute could not function if interpreted literally; it had to be saved from itself.”

Collyer was not concerned by the “cascading series of nonsensical and undesirable results” that the administration claimed would flow from failing to recognize a permanent appropriation for Section 1402: “Higher premiums, more federal debt, and decreased enrollment are not consequences of the [Affordable Care Act’s] text or structure,” Collyer explained, but rather those “would flow … from Congress’ continuing refusal to appropriate funds.” She concluded, “That is Congress’s prerogative; the Court cannot override it by rewriting [the statute].”

Collyer granted summary judgment to the House of Representatives, enjoining any “further reimbursements [to insurance companies] under Section 1402 until a valid appropriation is in place.” However, she stayed her injunction pending an appeal.

There is no doubt that the administration will file an appeal with the D.C. Circuit Court of Appeals, which President Barack Obama successfully packed full of his appointees in 2013.

Impact of November Elections on Lawsuit

It should also be kept in mind that the November election could affect this litigation. A House resolution adopted on July 30, 2014, authorized the speaker of the House to file the lawsuit. The House in the new 114th Congress adopted a second resolution on Jan. 6, 2015, authorizing itself to succeed the 113th House as the plaintiff.

If Democrats win control of the House of Representatives in November, there seems little doubt that they will do whatever is necessary to withdraw this suit and concede victory to the administration and its misinterpretation of the Obamacare law.