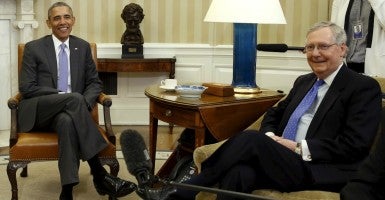 An overwhelming number of senators on both sides of the aisle approved the energy and water development appropriations bill, by a vote of 90-8. Conservatives had objected to the higher spending levels and lack of policy riders in the weeks leading up to the vote.

In the end, it didn’t seem to matter.

It’s a victory for Republican leadership and an initial step toward achieving their goal of funding the federal government by passing 12 appropriations bills. Moving legislation and avoiding fights has been a top election year priority for Majority Leader Mitch McConnell. The Kentucky Republican wants the Senate to prove that Republicans can govern by avoiding a one-and-done omnibus spending package at the end of the year.

But the energy and water bill received little fanfare from Senate conservatives. They complain that the measure, which funds the U.S. Army Corps of Engineers and the Department of Interior, spends $261 million more than even Obama requested.

Sen. Mike Lee described the legislation as “simply unacceptable in a time of rising debt and slower economic growth.”

The Utah Republican told The Daily Signal that “we’re never going to get our nation’s rising deficits under control until we can stick to our previous agreements on spending levels,” referring to the limits set in the 2011 Budget Control Act.

Voting no along with Lee were seven other Republicans: Ted Cruz of Texas, Deb Fischer of Nebraska, Jeff Flake of Arizona, Arthur Heller of Nevada, Rand Paul of Kentucky, Ben Sasse of Nebraska, and Jeff Sessions of Alabama.

Though Congress has not passed a budget resolution, the Senate started advancing spending bills at levels established in the 2015 Bipartisan Budget Act, which increased government discretionary spending by $30 billion above the 2011 caps.

Still, Sen. James Lankford, R-Okla., told The Daily Signal he is glad the appropriations process finally got off the ground.

“This is the first time this appropriation bill has passed the Senate since 2009,” Lankford, who sits on the Appropriations Committee, explained. “To avoid last-minute continuing resolutions, backroom deals, and omnibus bills, we must move bills through a regular-order appropriations process.”

Sen. Tom Cotton, R-Ark., almost thwarted that effort. His amendment would have barred the federal government from using funds allocated in the spending bill to purchase heavy water from Iran, a key component to the production of a nuclear weapon.

For weeks Democrats blocked the bill, calling Cotton’s amendment a nonstarter that would undercut Obama’s nuclear agreement with Iran and automatically trigger a veto.

“The White House had very strong feelings and indicated they would veto this bill if it passed with this amendment,” Sen. Dianne Feinstein, D-Calif, said Wednesday. “How do we start an appropriations process with the presidential veto in the wings?”

To bypass the blockade, Republican leadership scheduled a vote on Cotton’s amendment, setting the threshold for passage at 60 votes. It fell just short Wednesday by a 57-42 vote.

Alexander and Paul were the only Republicans to vote against the amendment. Neither responded to multiple requests for comment by The Daily Signal.

Though he expressed frustration, the Arkansan thanked Alexander and McConnell “for working with me to make sure that we have the Senate on record on this very important issue.”

Other conservatives were not as charitable in their assessment, grumbling that McConnell allowed Democrats to outfox Republicans procedurally.

GOP leadership hamstrung Cotton’s measure, a senior conservative Senate aide told The Daily Signal, when McConnell didn’t fight to have the amendment considered as “germane,” ensuring it would fail.

According to Senate rules, an amendment needs only 51 votes to pass if it is germane, meaning it is directly relevant to the underlying legislation up for consideration. Under this standard, Cotton’s bill could have passed.

“McConnell said the ‘Senate is open for business,’ and if you’re a K Street lobbyist or Democrat interest group, that’s definitely true,” the aide said. “But Harry Reid and the Democrats have made it abundantly clear that conservatives policies will not be tolerated in the appropriations process.”

Democrats, not the Republican majority leader, defeated the amendment, Stewart told The Daily Signal. In fact, he noted, McConnell worked with Cotton and used his parliamentary privileges as Senate leader to advance the amendment.

But by keeping the Senate from ending debate, Democrats stopped the chamber from recognizing Cotton’s amendment as germane, ultimately killing the measure.

If any conservative staffers are not clear on that Senate procedure, Stewart said, “They should just come to me or the cloakroom. We’d be happy to explain any rule they aren’t familiar with.”

Still, the conservative aide complained, this isn’t the first time a conservative measure wasn’t treated as germane and therefore didn’t qualify for the lower 51-vote threshold.

A similar episode occurred two weeks ago, killing an amendment that would have thwarted the Environmental Protection Agency’s controversial Waters of the United States rule.

This article was updated to name the eight senators who voted against the spending bill and the two who didn’t vote.