Why Obama Is Wrong to Focus on Hiroshima 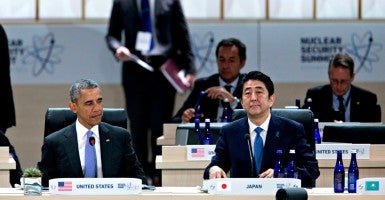 History remains very much alive in East Asia. Millennia of invasions, occupations, and subjugation form the foundation for present-day perceptions.

The predominant calamity for many in this regard is the 20th century war precipitated by the Japanese attempt to impose a Greater East Asia Co-Prosperity Sphere on its neighbors.

The second World War, or “The War,” as it was long called, and Japan’s contribution to it still heavily influences impressions of modern day Japan, particularly in China and South Korea.

President Barack Obama announced he will travel to Hiroshima this month. Deputy National Security Adviser Ben Rhodes commented that Obama “will not revisit the decision to use the atomic bomb … instead, he will offer a forward-looking vision focused on our shared future.” Rhodes added that Obama’s Hiroshima trip will focus on pursuing “the peace and security of a world without nuclear weapons.”

The Influence of ‘The War’ on Japan

Japan’s role in “The War” still heavily influences Japan’s opinion of itself. For this reason, since 1945, Japan has been the epitome of a peace-loving nation, renouncing the use of war to settle international disputes and imposing severe restrictions on its self-defense forces. Japanese pacifism has become so ingrained that the United States has even urged its former enemy to assume a larger role in combating regional and global security threats.

Last year, when Washington and Tokyo revised alliance guidelines to incorporate an expanded, though still severely constrained, Japanese security role, it triggered concerns by America’s other critical Asian ally South Korea. Washington urged Seoul to focus on Japan’s benign behavior during the most recent 70 years rather than during the 35-year occupation during the first half of the 20th century.

America is often accused of having a short memory. But World War II remains a bedrock historic era and a lodestar for America’s sense of who we are as a country. Pearl Harbor made clear that isolationism was not a viable way to avoid the dangers of the world. Withdrawing from the world and raising the drawbridge did not deter America’s enemies. The same is true today.

In April 2009, Obama described his commitment to a vision of “a world without nuclear weapons.” But the world, and reality, intruded that day with North Korea test launching a long-range missile whose objective would be to deliver a nuclear weapon against the United States. Since that speech, Pyongyang augmented its nuclear arsenal and the means to deliver them, making clear that it is to threaten the United States.

Obama may not apologize for America’s wartime use of atomic weapons, and that’s good, but coming without a preliminary visit by the Japanese prime minister to Pearl Harbor, Obama’s trip will appear to affirm the oft-expressed Japanese view of itself as victim due to its unique status as the only country to have suffered an atomic attack. Focusing the visit on the “evils” of nuclear weapons will only contribute to this dynamic.

The story of Hiroshima is not simply a story about the first use of nuclear weapons. The U.S. decision to bomb Hiroshima was not an isolated event but the culmination of an extraordinarily brutal war on which hinged no less than the future of the world.

The horrors wrought by the atomic bomb on Hiroshima cannot be fairly or accurately discussed but in the context of the millions of American and Japanese casualties avoided by the rapid end of the war, which obviated the need for an invasion of Japan.

A common phrase amongst U.S. servicemen during World War II was “Golden Gate in ’48,” reflecting the view that the war would drag on for three more years. Historians also point to the daily casualty rate amongst civilians throughout occupied Asia, which would have occurred had the war been extended.

Hiroshima reflects the tragedy of aggression and war, not solely of a weapon of war. The Axis powers may have been consigned to the ash heap of history, but modern day despots remain.

More important than an end to nuclear weapons, Obama should instead call on all nations to band together against totalitarian regimes that seek to expand their control over weaker neighbors. The presidential podium can serve that purpose—if the correct vision is articulated from it.