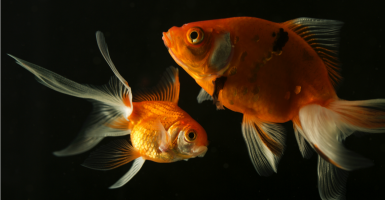 What do honeybees on cocaine, drunken songbirds, and sexy goldfish have in common? Each was the subject of extensive, taxpayer-funded research and each features prominently in Sen. Jeff Flake’s most recent expose on government waste.

The Arizona Republican’s oversight report—”Twenty Questions: Government Studies That Will Leave You Scratching Your Head“—highlights $35 million worth of federally funded research projects of dubious merit.

It’s part of an effort to increase oversight and efficiency in government research.

The overseas Ebola epidemic, Flake’s office said, provided the original impetus for this study. In 2014 the director of the National Institutes of Health, Dr. Francis Collins, complained that lack of government funding hampered the agency’s effort to develop a vaccine for the Ebola virus.

It did not, however, keep the NIH from spending part of its $32 billion budget to study the appearance of Jesus Christ’s face on toast, the musical preferences of monkeys, and the contagious nature of yawning.

Flake, who is chairman of the Senate Foreign Relations Subcommittee on Africa and Global Health, argues that the funding would be better deployed to find “treatments for cancer, Alzheimer’s disease, and viral infections such as Zika and Ebola.”

A researcher at the University of Illinois at Champaign-Urbana, Gene Robinson, spent $242,600 in taxpayer funds to observe the impact of cocaine on honeybees. When hopped up on the stimulant, the insects are “about twice as likely to dance,” he found.

At Bowdoin College in Maine, researchers spent $3.6 million on a study entitled “The Good, the Bad, and the Sexy: How Brain Chemistry Affects Social Judgment.” Toward that end, scientists asked, “What makes goldfish feel sexy?” Researchers discovered that when given sex steroids, male goldfish exhibited more social behavior and swam closer to their female counterparts.

Flake’s report comes as the White House calls for a standalone emergency package worth nearly $2 billion to prepare for the coming Zika virus.

On April 17, Dr. Anthony Fauci, director of the NIH’s National Institute of Allergy and Infectious Diseases, called for additional funding from Congress on CBS News’ “Face the Nation.”

“Right now, we’re using money from other accounts to [fight the virus],” Fauci said. “And that is going to be just a stopgap measure. We are going to have to get the money to be able to do the full job we planned to do.”

But Flake insists that Congress needs to do a better job overseeing how already allocated money is being spent.

Washington, he said, must “set clear goals for federally funded research, improved transparency to ensure tax dollars are being prioritized to meet those goals, and reduced wasteful and duplicative spending on lesser priorities.”

Flake has carved out a career in Congress going after questionable federal expenditures.

In December, the fiscal hawk released an annual “Wastebook” outlining over $100 billion in what he described as “wasteful government spending.” Before that, he had released three other oversight reports with similar examples.