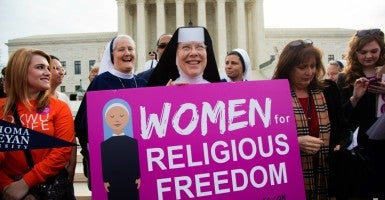 Liberals, stop being so defensive. That’s the message of Harvard law professor Mark Tushnet in a new post at Balkinization, titled “Abandoning Defensive Crouch Liberal Constitutionalism.” The problem, according to Tushnet, is that liberals have been too defensive when it comes to advancing their agenda in the courts.

Tushnet blames what he calls the “culture wars” on conservatives, and he says liberals should now make conservatives pay.

Now that President Barack Obama has reshaped the federal judiciary, liberal causes can win easily in court. And now that Justice Antonin Scalia has died, “judges no longer have to be worried about reversal by the Supreme Court if they take aggressively liberal positions.”

Tushnet blames what he calls the “culture wars” on conservatives, and he says liberals should now make conservatives pay. “The culture wars are over; they lost, we won,” he writes in italics. Tushnet claims that conservatives “had opportunities to reach a cease fire, but rejected them in favor of a scorched earth policy.”

It seems hard to envision how conservatives could have declared a unilateral cease fire when they weren’t the ones firing in the first place. Liberals aggressively sought in the courts an unlimited abortion license, a redefinition of marriage, and now for transgender bathroom policies throughout the nation. Liberals haven’t been bashful to use the courts to reshape social policy when they couldn’t win at the polls.

It seems hard to envision how conservatives could have declared a unilateral cease fire as liberals aggressively sought in the courts for an unlimited abortion license.

So what’s next? Tushnet explains: “the question now is how to deal with the losers in the culture wars.” And his answer isn’t comforting: “My own judgment is that taking a hard line (‘You lost, live with it’) is better than trying to accommodate the losers.”

Tushnet explains his unwillingness to respect the rights of the “losers”: “Trying to be nice to the losers didn’t work well after the Civil War, nor after Brown. (And taking a hard line seemed to work reasonably well in Germany and Japan after 1945.)”

Ah, yes, if the “losers” of the American “culture wars” are the functional equivalent of racists and Nazis, then Tushnet’s argument works wonderfully. But if Orthodox Jews, Roman Catholics, Evangelical Christians, Latter-day Saints, faithful Muslims, and other Americans who believe that marriage is the union of a man and woman are decent members of society, maybe Tushnet should reconsider his hostility.

In my new book, “Truth Overruled: The Future of Marriage and Religious Freedom,” I argue that the question for people who believe marriage is the union of husband and wife is whether the government will treat us like pro-lifers or like racists. And I offer a roadmap on how to make it so that we’re recognized as people of reason and good will, like pro-lifers.

But, Tushnet makes it clear that he and his colleagues among the liberal elite want the government to treat conservative Christians worse than racists—like Nazis.

It’s our job to make sure that Tushnet doesn’t succeed. It’s what Americans did after Roe v. Wade. Congress and the states passed a variety of laws that protect pro-life conscience. In Roe v. Wade the Supreme Court invented a right to an abortion. But after Roe, legislatures made clear that government cannot require a pro-life doctor or nurse to perform an abortion—that they, too, had rights.

The same is true after the Supreme Court’s redefinition of marriage. Government has to treat two people of the same sex as married, but private schools, charities, businesses, and individuals should not have to abandon their beliefs.

Tushnet embodies a particularly vicious form of illiberal liberalism. But protecting the rights of a minority—his “losers”—in the wake of such change is an important feature of America’s tradition of tolerance in the midst of pluralism. It’s what real liberalism requires.

This is why federal legislation like the First Amendment Defense Act and state legislation like Mississippi’s Protecting Freedom of Conscience From Government Discrimination Act are so important. As I explain in “Truth Overruled,” good public policy is needed at the local, state, and federal levels to protect cherished American values.

When your neighbors are not in fact Nazis, you should favor public policies that help achieve civil peace amid reasonable disagreement. You should seek to protect pluralism and the rights of all Americans—including the “losers.”