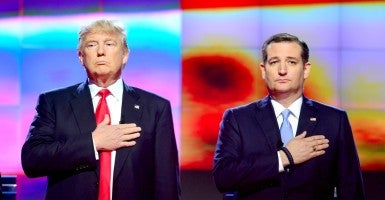 With massive debt, cronyism in Congress, and federal control of education failing our children, we need real leadership with courage and conviction. (Photo: Johnny Louis/JL/Sipa USA/Newscom)

The race for the GOP presidential nomination this year has been one of the most interesting in decades. Most candidates on the Republican ticket made a clear effort to cast themselves as outsiders, fed up with Washington’s failure to follow through on promises made in prior elections.

The two finalists with the most electoral votes, Donald Trump and Sen. Ted Cruz, R-Texas, were the most outspoken against “business as usual” in Washington. Both campaigned on the need to end amnesty, repeal Obamacare, end Common Core, and rebuild the military.

In the wake of these events, I personally found it confusing that The Wall Street Journal editorial staff, who have long been advocates along with Heritage for conservative reforms, had such puzzling opinions on this anti-Washington streak. Their take on Cruz practically drips with disdain:

In the narrative they contrived, true conservatives are forever betrayed by the corrupt leaders of what Mr. Cruz called ‘the Washington cartel.’ Thus they set up impossible feats of strength like the Obamacare government shutdown, or phony tests of political purity on drones and gun control. Mr. Cruz also saw immigration as a wedge for the base and made it his signature.

Contrast this with a more evenhanded narrative regarding Trump:

Yet GOP voters made the ultimate decision, and that deserves some respect unless we’re going to give up on democracy. The GOP electorate had its chance to reconsider Mr. Trump after his Wisconsin defeat a month ago. Instead the voters rallied behind him for seven straight wins with a majority in each state. The most hopeful way to look at this is that GOP voters see Mr. Trump as the vehicle for American revival.

To The Wall Street Journal, it seems the virtue of anti-establishment rhetoric depends on who is saying it. The difference in tone ignores the fact that Cruz and Trump had similar messages and together mostly dominated the GOP field in state after state.

So he and his allies at the Heritage Foundation and the Mark Levin talk-radio right put together a strategy to inflame populist resentment against the GOP Congress and catapult Mr. Cruz to the White House.

This is wrong. America’s resentment toward Washington is real and has been building for years and has been driven by failures on both sides of the aisle.

For our part, Heritage is a research and educational institution and does not support or oppose any candidate for public office, nor do we work for or against any political party.

We will continue to focus on formulating conservative policy solutions that will help every American regardless of political affiliation, including the millions of Americans who distrust Washington. As we have always done, we will stand behind those ideas and communicate them to the public—including elected office holders, candidates, and campaign staff. We’re informed by conservative principles; our scholars develop policy recommendations built on those principles, and we aggressively push them into the national dialogue and work with anyone open to our ideas.

That’s why we hold educational forums on Capitol Hill and have briefed numerous candidates and their staff in the Republican presidential field, including both Trump and Cruz. If Hillary Clinton, Bernie Sanders, or any other candidate wants to learn a little more about free markets or religious liberty, our doors are open to them as well.

In the meantime, I hope our friends at The Wall Street Journal and across the conservative movement reflect on challenges ahead and redouble their efforts to educate Americans on the need for commonsense solutions. With massive debt, cronyism in Congress, and federal control of education failing our children, we need real leadership with courage and conviction.

Our nation has faced challenging moments many times before, and I’m confident we can meet the challenges of today. Over the next few months and years, the conservative movement will engage in a muscular debate over how the timeless truths of conservatism can be applied to solve the problems we confront in the 21st century. It is a debate we expect to have with The Wall Street Journal editors as partners.