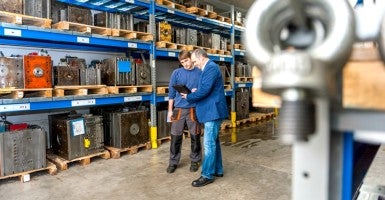 Inflation has grown by only 1 percent over the past 12 months, so this represents real wage gains for many workers. (Photo: Daniel Ingold/Westend61 GmbH/Newscom)

The Bureau of Labor Statistics’ April jobs report contained mixed economic news. The agency reported wages grew healthily, overall unemployment did not rise, and long-term unemployment fell slightly in April. At the same time, job growth slowed and labor force participation dropped. The labor market is not contracting, but it is not growing as quickly as some analysts had believed either.

This represents moderate job growth, but well below the recent pace of job creation. Over the previous six months, employers added 243,000 net new jobs a month. The job creation that did occur was heavily concentrated in just three sectors: professional and business services (+65,000), healthcare (+44,000), and leisure and hospitality (+22,000). Most other sectors experienced tepid growth or slight job losses. Revisions to the February and March reports also revealed that employers created 19,000 fewer net jobs than previously believed.

The ageing of the population and retirement of the baby boomers cannot explain this drop: Labor force participation fell just as quickly among 25 to 54 year olds. More likely the February and March gains reflected statistical noise—not actual economic improvement—which did not reappear in the April estimates. Americans have not been re-entering the labor market at the pace economists previously believed.

Economists had begun to get optimistic about labor market growth. The April employment report suggests they should temper their expectations. The last two months showed strong growth, but this month’s report suggests some of that may have been nothing more than sampling noise.