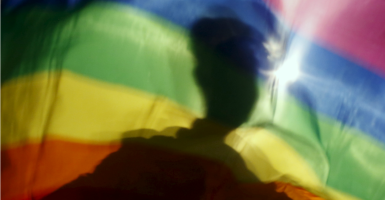 A large California teachers union and its national affiliate are forcing nonunion teachers to pay for political activism, according to a disclosure form acquired by The Daily Signal.

Under a category called “human rights,” both the National Education Association and the California Teachers Association require nonunion teachers to finance LGBT leadership training and other political goals that may run counter to the teachers’ convictions, The Daily Signal’s analysis of the disclosure form shows.

The form shows that unions charged $1.1 million in “human rights” costs to nonunion teachers as well as members in 2013-14, while identifying another $1.2 million in the same category as not chargeable to those who weren’t members.

A separate page lists $20,228 in chargeable costs for “Women and LGBT Issues” as a line item under the category  of human rights. The same page includes a line item on “unconscious bias training” for which nonmembers must cover $5,436.

The teachers unions also spend a pretty penny on annual conferences described as focused on education, some of which appear designed instead to further political causes.

For the 2013-14 school year, the teachers unions charged nonmembers as well as members a total of $49,739 for an “Equity Human Rights Conference,” nearly twice as much as the $25,622 deemed not chargeable to nonmembers, the disclosure form shows.

The unions charged nonmembers as well as members a total of $17,108 for an “LGBT Conference,” referring to the lesbian, gay, bisexual, and transgender movement, with a lower amount, $11,358, that wasn’t charged to nonmembers.

James Sherk, a labor policy analysis with The Heritage Foundation, told The Daily Signal that line items devoted to human rights appear to be superfluous to the California Teachers Association’s negotiating responsibilities.

“This Hudson notice seems to show the union overcharging the nonmembers it represents,” Sherk wrote in an email, adding:

Donating to ‘human rights’ organizations is unrelated to the union’s collective bargaining activities and should not be chargeable to [nonmembers]. This is especially true when many self-described human rights organizations advance an ideological agenda that those nonmembers may not share.

Here are pages from the Hudson notice to nonunion California teachers obtained by The Daily Signal:

2015 Hudson Notice by The Heritage Foundation

At the Supreme Court

California “agency shop” law requires public school teachers and other public school employees to either join a union or pay “fair share” fees as a condition of their employment.

While nonunion members who pay union fees technically are permitted to “opt out” from paying for political activism on top of collective bargaining costs, many teachers view the process as cumbersome and difficult to navigate.

Ten California school teachers made this argument in joining with the Christian Educators Association International in suing to overturn the California law on First Amendment grounds. The 10 teachers also argued that the opt-out arrangement is unconstitutional and that nonmembers “should be presumed to be noncontributors unless they affirmatively opt in.”

The case, known as Friedrichs v. California School Teachers Association, went all the way to the U.S. Supreme Court, which issued an indecisive 4-4 ruling in March. The deadlock in the wake of Justice Antonin Scalia’s Feb. 13 death means a lower court decision in favor of the unions remains in place.

Nonunion teachers must continue to pay fees until the Supreme Court revisits the free-speech objections raised in the Friedrichs suit, which takes its name from Rebecca Friedrichs, one of the nonunion teachers. In the meantime, public school teachers in California and other parts of the country with similar agency shop arrangements must continue to pay fees even if they are not members of a union.

However, because the Supreme Court previously ruled that nonmembers have the option to avoid paying for a union’s political activism, Hudson notices remain highly relevant.

Basic considerations of fairness, as well as concern for the First Amendment rights at stake, also dictate that the potential objectors be given sufficient information to gauge the propriety of the union’s fee.

Unions are required to provide this “sufficient information,” which has come to be known as the Hudson notice, to nonmembers. How to Opt Out

The notice also must include a union’s audited financial report for the year. But a union’s independent auditor does not need to confirm that the union correctly classified expenditures as being chargeable or nonchargeable, according to a legal brief in the Friedrichs case.

The Hudson notice is not available online, which means full members of a union do not typically see the information.

Neither the NEA nor the California Teachers Association  responded to The Daily Signal’s requests for comment.

If nonmembers don’t meet the deadline, they must pay the full union fee, typically about $1,000 a year. The Hudson notice acquired by The Daily Signal shows that for the 2015-16 school year, the fair share fee for nonmembers was $644 for the California Teachers Union and $185 for its parent organization, the National Education Association, for a total of $829.

Nonunion teachers who jump through all the hoops and complete the opt-out process would have been eligible to receive $504.60 in refunds out of the combined $829 fee for the 2015-16 school year, according to the Hudson notice, which is dated Oct. 15, 2015.

The notice informs nonmembers that they must send an enclosed form back to the union postmarked no later than Nov. 15 to receive the refund.

During oral arguments before the Supreme Court, attorneys for Friedrichs and the nine other California teachers said the collective bargaining process itself had become politicized, making it difficult to delineate between what is genuinely chargeable and what amounts to a violation of the constitutional right to free speech.

The state teachers union says it has a “Human Rights Department” that “supports the goals  and objectives” of the union by “advocating equity in all aspects of CTA activities.”

The first few pages of the Hudson notice cover a local union as well as the California Teachers Association, which has about 325,000 members. A subsequent section covers the NEA. A total of 28,323 individuals paid fees in the 2014-2015 school year after declining to join the union, according to the Friedrichs suit.

The portion of the Hudson notice devoted to the NEA makes clear that the national organization also places an emphasis on advancing LGBT initiatives, or GLBT as the unions call them.

In the disclosure, the California Teachers Association says nonchargeable expenses “are those which do not relate to performing the duties of the exclusive representative in dealing with the employer on labor-management issues.” The notice goes on to list examples that include support for political candidates, ballot initiatives, public relations efforts, and lobbying campaigns.

Vincent Vernuccio, director of labor policy for the Mackinac Center for Public Policy, a free market think tank, said he sees right-to-work laws–which empower employees to decide whether to join a union and pay dues–as the only viable way out of forced unionization.

“For government unions, everything they do is inherently political and public employees have a First Amendment right to avoid paying, associating [with], or funding politics they disagree with,” Vernuccio said.

Vernuccio said he also found the Hudson notice from the California teachers unions to be highly revealing:

Ignoring the fact that everything government unions do is inherently political, the unions’ disclosure to their nonmembers shows that those who have tried to exercise their rights in non-right-to-work states are still paying for blatant union politics. Issues deemed to be internal communication can be blatantly political, but because they are considered inside the union fee, payers must still pay.

As previously reported by The Daily Signal, the Center for Worker Freedom published an online “Indicator of Labor Liberty” with maps providing before-and-after shots of how a Supreme Court decision in favor of the nonunion California teachers would play out state by state.

If the high court revisits the Friedrichs case after the empty seat is filled and then strikes down mandatory union dues, teachers and other government workers in 25 states would be free from forced unionization, it shows.