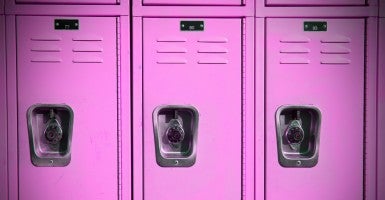 A group of 51 families whose children attend a high school in Illinois filed a federal lawsuit Wednesday, attempting to reverse a policy that allows a transgender student to use girls’ bathrooms, locker rooms, and other sex-specific facilities.

The families are challenging a policy at Township High School District 211 that was mandated by the U.S. Department of Education to accommodate the transgender student, who was born male but identifies as a female.

“It’s an organic group of parents and students who came together and said, ‘We have to do something about this—we can’t just roll over and allow the federal government to force our school to commingle the sexes in locker rooms,’” said Jeremy Tedesco, a lawyer representing the families.

The suit, which challenges the Education Department’s authority to redefine the term sex in Title IX of U.S. law to include gender identity and to enforce it against schools, is the first of its kind, Tedesco told The Daily Signal.

The president of the group filing the lawsuit, Students and Parents for Privacy, said she and other Cook County parents with children in the school district decided legal action “was the only thing we could do at this point.”

We did everything we could to work with the school district, and we were really hoping they would do the right thing and protect the privacy of all students, but when they chose not to, we felt we had no choice in order to protect the girls in the locker room. The group’s president asked that her name not be published because of the sensitive nature of the case.

The issue began in December 2013, when Student A filed a complaint with the Education Department against Township High School District 211, based in the village of Palatine, Ill.

The complaint alleged that District 211 had discriminated against the transgender student on the basis of sex.

Daniel Cates, superintendent of District 211, said in an October newsletter:

The goal of the district in this matter is to protect the privacy rights of all students when changing clothes or showering before or after physical education and after-school activities, while also providing reasonable accommodations to meet the unique needs of individual students. Our responsibility is to provide an environment conducive to learning for all its 12,000+ students.

According to the Education Department’s investigation, the student felt “crushed” by the school district’s decision not to allow access to the locker rooms, “which she said indicated that the school did not accept her as a female.”

After the Education Department had completed its investigation, it ordered District 211 to grant Student A full access to the girls’ locker rooms and install privacy curtains inside those locker rooms, or else be at risk of losing federal financial assistance.

Thomas Petersen, director of community relations at Township High School District 211, said the school “could potentially lose up to $6 million in federal funding.”

Now, the 73 parents and 63 students who are members of the group Students and Parents for Privacy are suing, arguing the Education Department lacks the authority to redefine sex in Title IX of U.S. law to include gender identity.

The Christian legal aid group Alliance Defending Freedom is representing the parents and students, along with local support from lawyers at the Thomas More Society.

“What we’re attempting to do in this case is stop the Department of Education from redefining sex in Title IX to include gender identity,” Tedesco, senior counsel for Alliance Defending Freedom, told The Daily Signal. “It has no authority whatsoever to do that.” Title IX is the federal law that bans discrimination on the basis of sex in any federally funded education program. Whether or not Title IX applies to transgender students is an issue that has been vigorously debated, with courts ruling on both sides.

Most recently, a federal appeals court in Richmond, Va., ruled that a transgender high school student who was born female but identifies as a male has the right to pursue discrimination charges against a school district for blocking access to the boys’ bathrooms.

The judges of the U.S. Court of Appeals for the 4th Circuit cited the Obama administration’s interpretation of Title IX in issuing their 2-1 decision.

The Obama administration stated in a 2014 document that “Title IX’s sex discrimination prohibition extends to claims of discrimination.”

Tedesco called the ruling in Virginia a “complete outlier,” arguing that other courts have ruled the opposite way:

There’s been several courts that have addressed the question of whether Title IX applies to and protects against gender identity discrimination, and all those courts up to the 4th Circuit’s decision have said it does not.

If Americans want to add additional protections for gender identity, Tedesco said, it’s the job of Congress—not the Education Department—to make those changes. He said:

If Congress wants to redefine sex to include gender identity—if they want to add gender identity as a protected class under Title IX—they can do that through the regular lawmaking process. But Congress has rejected it several times, so the Department of Education just comes in and makes it up and adds it to the law. That’s something they have no authority whatsoever to do. And now they’re running around the country and forcing essentially what is a new Department of Education rule against schools across the country.

Since 2010, Sen. Al Franken, D-Minn., has proposed that Congress pass a measure that would provide protections for students from discrimination on the basis of sexual orientation and gender identity. Thus far, that legislation has failed.

In December, six female students attempted to explain to the District 211 school board why they were uncomfortable with allowing Student A into their locker room.

The president of Students and Parents for Privacy said she supports accommodations for Student A that balance the student’s interests with the rest of the student body.

Student A, who is represented by the American Civil Liberties Union, said in an earlier press release that using a separate locker room “stigmatized me, often making me feel like I was not a ‘normal person.’”

At the December school board meeting, one speaker called the old policy  “institutionalized segregation.” Others brought up the high rates of suicide and depression for transgender men and women.

The head of the privacy group, who has children in the school district, said the group cares about Student A  but is asking for fairness. She said:

We truly do care about these children who struggle with gender identity, and these children are welcome in my home. All I ask is that the respect go both ways. That’s what we’re not seeing. We’re just seeing demands. The lawsuit, filed in the U.S. District Court for the Northern District of Illinois, hinges on the idea that the school can and should make accommodations for Student A, but those accommodations shouldn’t violate the privacy and safety rights of other students.

“The reality is, the folks driving this agenda on the other side from us won’t accept anything other than full access to the opposite-sex restroom and locker room as the solution,” the families’ lawyer said, adding:

This article has been updated to reflect the most recent number of families that are part of the lawsuit.