The Horrible Practice of Honor Killings in Pakistan 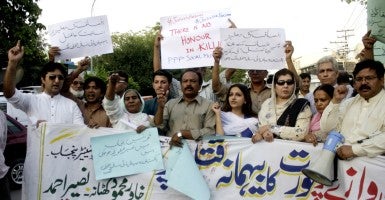 Soyoung An is the ASAN visiting fellow at The Heritage Foundation.

More than 1,000 girls and women die in honor killings in Pakistan each year. The United Nations estimates that there are about 5,000 honor killings around the world annually, including in the U.S. and Europe.

Recently, The Heritage Foundation hosted a screening of the Oscar-winning documentary directed by Sharmeen Obaid-Chinoy entitled, “A Girl in the River: The Price of Forgiveness,” the story of a 19-year-old Pakistani girl, Saba Qaiser, who survived an attempted honor killing carried out by her father and uncle.

Even when police arrested Saba’s father and uncle, they justified their actions by saying they were defending their family’s honor. What is more concerning is that victims or families of victims are often forced to forgive their perpetrators, and once they forgive them, the individuals are no longer subject to criminal proceedings. Familial and social acceptance of honor killings has nullified the effectiveness of the law, the Honor Killings Act, which is intended to criminalize the practice.

Kicking off the event, James Carafano, vice president for national security and foreign policy at The Heritage Foundation, emphasized that honor killings were not unique to Pakistan and happened throughout the world. He also praised Pakistani Ambassador Jalil Abbas Jilani for having been a long-time advocate for women’s issues and for agreeing to provide remarks at The Heritage Foundation on such a crucial topic.

In his remarks, Jilani noted that honor killings “have no religious or cultural motivation” but unfortunately have been in practice since antiquity. Jilani underscored that the Pakistani government is taking steps to end this barbaric practice. He also commended the efforts of Pakistani women, including the director of the documentary, Obaid-Chinoy; girls’ education activist Malala Yousafzai; and the first female democratically-elected head of a Muslim nation, Benazir Bhutto, who was assassinated by Islamist extremists in December 2007. The ambassador recognized that the activities of these women represented a positive step forward for women’s rights in Pakistan.

Regrettably, one obstacle to change in Pakistan has been from the Islamist parties, which opposed the Punjab Provincial Assembly’s recent passage of the “Protection of Women Against Violence Act.” The act seeks to protect women from violence, rehabilitate women that are victims of violence, and enhance women’s right to participate in Pakistani society.

Leaders of the Islamist parties argued that the bill contravened the Quran and would be detrimental to family cohesion. According to Lisa Curtis, a senior research fellow at The Heritage Foundation, “Unfortunately there is a tendency among religious hardliners to portray anything in favor of protecting women or defending their rights as un-Islamic.”

Following the film, an audience member, Uzma Sarfraz Khan, described her personal tragic experience with honor killings. Khan’s husband was killed while trying to protect a young girl who had sought to escape her family’s attempts to kill her in defense of their honor. Khan said, “It’s shocking that this tragedy is still perpetuating 16 years later. You never get real statistics on honor killings because they are not recorded if victims forgive the perpetrators.” She believed the actual number of victims of honor killings in Pakistan was closer to 100,000 per year.

Khan noted that she was lucky to have the means to take her children out of Pakistan so that they would not become part of a blood feud. She lamented the fact that so many girls like Saba have no choice but to stay in their communities, where the abusers go unpunished. She hoped people would be inspired by the film to make the changes necessary to end the horrific practice of honor killing.

“A Girl in the River” has already drawn greater attention to the issue of honor killing and women’s rights in Pakistan. The documentary points to the need for further legal reform in Pakistan, including outlawing forgiveness by the victim, so that the perpetrators will receive full sentencing as in any other case of murder.