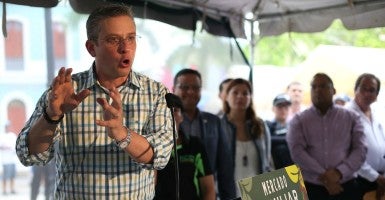 Gov. Alejandro García Padilla has announced that Puerto Rico’s Government Development Bank would default on most of the $422 million payment currently due on the U.S. territory’s debt. As Puerto Rico’s debt crisis evolves and Congress looks for ways to improve draft legislation addressing the crisis, the Government Development Bank default can inform observers’ understanding of the crisis.

Fact: The Government Development Bank is a public corporation.

The Government Development Bank is an unaccountable, opaque government bank that allows insiders access and information while keeping outsiders in the dark regarding Puerto Rico’s finances. It has no independent revenue source or plan to pay its creditors; they should have been more careful about lending to such a poorly-conceived institution.

This episode, Puerto Rico’s third default in a year, shows that Puerto Rico cannot easily be forced to repay creditors. Because of that, creditors holding a quarter of the Government Development Bank’s debt have already negotiated a voluntary restructuring agreement, taking heavy losses but potentially protecting themselves from a worse deal later on. Although this deal will not take effect without unanimous agreement, it staves off litigation and shows that negotiation can be fruitful. Puerto Rico’s credit unions separately restructured $33 million of Government Development Bank bonds.

In an effort to protect its defaults from litigation, Puerto Rico’s legislature gave the governor authority to implement a moratorium on debt repayments. Gov. García Padilla invoked the moratorium in his decision to allow the Government Development Bank to default. Creditors who want to challenge Puerto Rico’s defaults in court will first have to find a court willing to overturn the debt moratorium, which makes the defaults legal under Puerto Rican law.

Puerto Rico’s credit unions have been pressured into over-investing in the island’s own bonds. This is a poor risk-management practice, because weakness in Puerto Rico’s government finances will usually coincide with other pressures on the credit unions’ savers. Similar regulatory pressure to purchase government debt led to massive bank failures in Spain and Greece. It remains to be seen whether restructuring deals and solicitous treatment by the territorial government will help the credit unions muddle through. While this is myth for now (the credit unions are still alive), this fear could come true if the economy gets worse.

Fact: The Government Development Bank is likely to be put into receivership.

Details are not yet settled, but investors expect that the Government Development Bank will be taken over by a “receiver”—a manager appointed by the stiffed creditors with a mandate to restore solvency or shutter the Government Development Bank, returning necessary functions to the Treasury of Puerto Rico. The debt moratorium does not prevent creditors from following through with the consequences of default.

There is no federal bankruptcy code for states precisely because states can default on their own, as nine did in the 1840s. States are considered sovereign for debt purposes, and creditors have little redress when a state repudiates its debt.

Unless Puerto Rico can expand economic freedom and restore opportunity for its people, it will continue to hemorrhage young workers to the mainland. Congress and Puerto Rico’s elected officials should be focused primarily on economic reform; debts will be payable only if growth occurs.