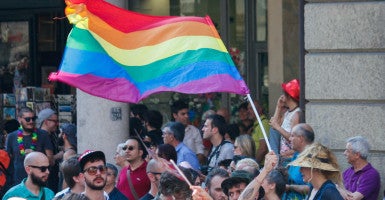 While the more explosive battles in Georgia, Mississippi, and North Carolina about bills regarding religious liberty and LGBT accommodations have gained national attention, Missouri has flown mostly under the radar. (Photo: Elena Aquila/Sipa USA/Newscom)

When it comes to religious liberty debates, big businesses don’t want the people to decide.

Or at least they don’t want the people of Missouri to decide.

While the more explosive battles in Georgia, Mississippi, and North Carolina about bills regarding religious liberty and LGBT accommodations have gained national attention, Missouri has flown mostly under the radar.

Perhaps it was because Missouri was debating a bill that, if passed, would have gone to the people to vote on, not the governor’s desk. Since the Supreme Court handed down its decision mandating all states recognize same-sex marriages as legal—a decision that directly went against what Americans in 31 states voted for in the years before, namely that marriage should exist solely between a man and a woman—there has been no statewide vote on religious liberty, at least that I’m aware of.

Yet the issue has continued to be pressing as florists, bakers, and others have faced heavy fines and arduous legal fights because they believe celebrating a gay or lesbian wedding would violate their religious convictions.

But apparently even allowing people to vote on a constitutional amendment that protected the religious liberty of both those opposed to and in favor of same-sex marriage—a bill that the citizens of Missouri were free to reject if they opposed it—was a step too far for big businesses.

“SJR-39 would send to the ballot a proposed constitutional amendment allowing individuals and small business owners to refuse services to lesbian, gay, bisexual and transgender (LGBT) Missourians,” said Missouri Competes, a coalition of businesses, in a statement on its website.

“This misguided bill would damage Missouri’s reputation and hamper our state’s ability to attract top talent, ultimately leading to tens of millions of dollars of lost revenue. “

Missouri Competes includes Pfizer, Marriott, MasterCard, Commerce Bank, Salesforce, Nestle Purina, and Anheuser-Busch in its coalition, according to its site.

First, let’s look at the ludicrousness of Missouri Competes’ statement: There is no nationwide push to not serve LGBT Americans, nor does any such movement exist in Missouri.

Barronelle Stutzman, a florist from Washington state amid a contentious legal fight over her refusal to provide flowers for a same-sex wedding, happily served the customer who brought the suit against her for years. The cases that are about religious liberty and customer services are about weddings, not about whether an LGBT person or couple will be served in non-wedding situations.

Now let’s examine the second sentence: “This misguided bill would damage Missouri’s reputation and hamper our state’s ability to attract top talent …” Seriously? Americans really are going to avoid a state because it allows its own people to vote on how people of faith should be treated on religious liberty issues?

An Associated Press/NORC Center for Public Affairs Research poll from December found that a whopping 82 percent of Americans (including 69 percent of Democrats!) thought it was “extremely or very important that [Christians] … be allowed to practice their religion freely.” That hardly supports the idea that the nation is ready to be up in arms over a vote in Missouri that would let citizens decide whether to protect religious liberty or not.

Unfortunately, it appears that, regardless of the views of the country (and their customers), many big businesses have decided they favor the most extreme LGBT agenda, not a balance that would allow gay marriage but also protect those who don’t wish to participate in such ceremonies because of their religious beliefs.

On Wednesday, Missouri’s religious liberty bill died in committee, thanks to Democrats and three Republicans. But the fate of Missouri’s bill aside, one thing is clear: When it comes to balancing religious freedom and LGBT priorities, big businesses have decided to side with extremists, not people of faith.